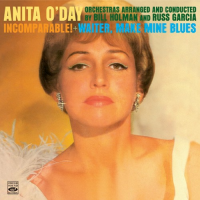 slideshow
In 1952, Norman Granz signed singer Anita O'Day to his Clef label. Clef became Norgran in 1954 and then Verve in 1955. Throughout the 1950s, O'Day recorded more than 20 albums for Granz's labels. Most of the recordings are quite good, but only a few are excellent. Two that stand out are Waiter, Make Mine Blues, arranged by Russ Garcia, and Incomparable, arranged by Bill Holman. Both were recorded in August 1960.

The quality of O'Day's seductive voice and magic of her sassy approach often were directly influenced by the feel of the arrangements behind her. For example, Anita O'Day Swings Cole Porter With Billy May was sheer hell for O'Day given the hectic bounce of May's barbed charts and the ordeal of serial re-takes. Waiter, Make Mine Blues and Incomparable are softly exciting, providing O'Day with just enough frothy surf to do her thing without knocking her off her board.

Interestingly, the first session for Waiter, Make Mine Blues (August 1) was followed by three days of Incomparable (August 16, 18 and 23) before the remaining sessions for Waiter resumed (October 4 and 7). I'm guessing Bill nailed down his dream band and had musicians commit to the three dates. So Granz express-tracked the recording. Or O'Day was heading out on tour in September and Granz figured it would be best to get one album in the can before she departed.

Both albums are brightly arranged. Russ Garcia's feel is modestly brassy, with an emphasis on trombones. The scores support O'Day's yen for improvisation rather impede it. Bill Holman's arrangements have more swagger and whip, but they, too, support O'Day and feed into her big band chops rather than capsizing the canoe.

The next Waiter session was scaled down: Bud Shank (as), unknown (p), Barney Kessel (g) or Howard Roberts (g), unknown (b), (d), + strings, Russ Garcia (arr,dir) (above). The songs recorded were When Sunny Gets Blue, Angle Eyes, Whatever Happened to You? and A Blues Serenade. The same personnel was on board for the final four tracks: The Thrill Is Gone, Detour Ahead, Goodbye and Stella By Starlight.

The more you listen to these two albums together, the more you realize they're sister albums—tender brass that tease out the best in O'Day.

JazzWax clips: Here's Detour Ahead from Waiter, Make Mine Blues...

And here's It Could Happen to You...