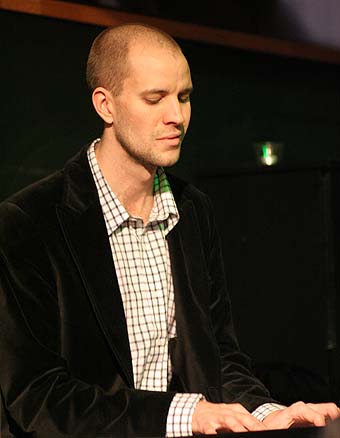 slideshow
As the keyboardist of the jazz-funk outfit Beat Funktion, Daniel Lantz is at the center of a disco maelstrom. Taken as a whole instead of the sum of its parts, Beat Funktion is a fireball of pop smarts, a living, breathing groove machine that grinds together the sweat-drenched vintage R&B of James Brown with the sexy hooks of '70s dance music and the soulful depth and instrumental complexities of jazz. On their debut album, The Plunge, Beat Funktion gyrates with relentlessly energy and expects listeners to do the same. Lantz takes a breather from mirror balls and leisure suits to discuss how this Swedish group discovered the Beat.

Q: How did Beat Funktion get together?

A: It was by pure chance, I must say, even though I had had ideas for a very long time to do something with funk and '70s grooves. It happened that I was contacted by a club owner back in 2007 that wanted live traditional jazz, a swing band playing standards, for one of his biggest club nights. He wanted it simultaneously with a modern DJ playing in the next room. I felt that it would be a disaster.

A: Most visitors for that night would be in their 20s and would never appreciate jazz standards from the '30s and '40s with jazz solos. How could they possibly dance to it? So I decided to take the liberty of rearranging all those jazz standards into funk songs. I kept the melodies, discarded the rest, and created bass grooves great for dancing. I got in touch with a number of jazz musicians I knew who could do it well, and we were ready to go.

Q: And how did the audience react to it?

A: I was surprised because it became a major hit on the dance floor. All those young people were overjoyed and came up in between tunes wanting to buy albums and asking the name of the band, which we did not have. So Beat Funktion was born that same night. We went on playing for this and other clubs, and gradually we became the team that we are today, a six-piece band with Karl Olandersson, Olle Thunström, Johan Öijen, Pal Johnson, Jon Eriksson, and me. We have been thinking of adding a seventh member, a percussionist, but we're not clear on that yet.

Q: How long did it take for Beat Funktion to develop its sound?

A: Well, not too long since the idea of capturing the essence of the '70s was there already from the beginning. The sound of the Fender Rhodes and other '60s/'70s sounds is surely an important ingredient, and with Johan Öijen's guitar, the possibility to include typical '70s inventions such as wah-wah and talkbox is a true luxury. But I suppose the sound of the band has a lot to do with how the compositions are shaped, too. The stuff that I have written for the band has always been intentionally very melodic, harmonically simple and easy on the ear, but the dissonance from the jazz improvisations on top of that is what creates the band's sound. I suppose the aspect of keeping the music dance-friendly has made me stay clear of odd time signatures, hence the prominent rock and disco beats. But I try not to be too theoretical about composition and set too many restrictions. According to me any musical expression is valuable to work with, as long as it comes from the heart.