A New Chapter In Jazz from The Scottish National Jazz Orchestra 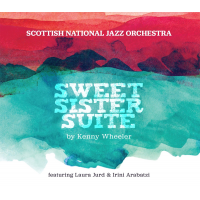 slideshow
The history of jazz is littered with tales of unsung heroes and overlooked genius. It could be argued that the trumpeter and composer, the late Kenny Wheeler, was one such musician. He moved almost invisibly through the mainstream milieu, yet, he was universally admired by his peers for his important contributions to jazz composition.

Many such personalities are dedicated to illuminating the deeper corners of the soul through emotive creativity, often revealing something autobiographical in their music. The SNJO is, therefore, delighted to present a highly personal memoir of Kenny Wheeler with this unique recording of his Sweet Sister Suite. It is a powerful, celebratory and emotional tribute to a quiet master of soul- searching melody, and a testament to the perennial connectivity of jazz across temporal and generational boundaries.

Sweet Sister Suite is a textured, measured and deeply layered work for trumpet and vocal that also features SNJO improvisers stepping out from the orchestra to take the spotlight. Arranged here in eight parts, it quickly develops from an understated introduction into an expansive essay in complex jazz, and it epitomizes Wheeler’s mastery of harmonic contrast, rhythmic changes and melodic clarity.

There is also a subtle sense of adventure in Wheeler’s writing, and Laura Jurd guesting on trumpet and flugel horn is an outstanding player who brings her own compass to this reading of Kenny Wheeler’s sonic map. The piece also features voice parts, a prominent feature throughout Wheeler’s long composing career, and Irini Arabatzi fully embraces the sympathetic, almost reassuring intent in Wheeler’s writing.

Sweet Sister Suite, commissioned by Tommy Smith in 1996, was written over a two-year period and completed in 1997. It was premiered in performance by the SNJO in 1998 and it remains a wonderful example of Kenny Wheeler’s signature style. Wheeler often composed by noting down ideas and fragments whenever and wherever they occurred to him; a method that he was seen to employ while recording and touring as a sideman with Tommy Smith and his group.

Kenny Wheeler, a quiet, almost reserved man, embarked upon some of the most adventurous explorations in jazz ever produced in the UK. He was a wonderful composer who spoke of his achievements with great modesty and dry wit, yet his music expresses every aspect of human thought and feeling. The evidence for that is all here, preserved for posterity on this dazzling recording of his Sweet Sister Suite.

The Scottish National Jazz Orchestra is supported by Creative Scotland