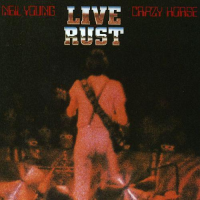 Look out, Mama, there's a white boat comin' up the river...

The hinges between decades is where Neil Young does his best work. Around the beginning/end of each of decade of the last 50 years, Neil Young has gotten mad and thrown a fit. These fits have produced a masterpiece or two. Please witness the following: Everybody Knows This is Nowhere (Reprise 1969), After The Gold Rush (Reprise 1970), Rust Never Sleeps (Reprise 1979) and Live Rust (Reprise 1979), Freedom (Reprise 1989), Ragged Glory (Reprise 1990), Arc-Weld (Reprise 1991), and Road Rock, Volume 1 (Reprise 2000, maybe not a "masterpiece," but how can one go wrong with any live Neil Young). An added plus is that three and one half of these releases are live albums.

The groundbreaking Rust Never Sleeps is the half live offering, containing all previously unreleased music. Side one of the LP is all acoustic music, typically introspective, beginning with a laid back "My My, Hey Hey (Out of the Blue)" and proceeding through the now classic "Thrasher" and "Pocahontas." Side two is another story altogether. Opening with the remarkable potent and desperate "Powderfinger," Young establishes his vision of the 1980s, one that is on the bleak side. This release ends with an electric "Hey, Hey, My, My (into the Black)" that pounds English Punk rock into T.S. Eliot's (and Evelyn Waugh's) a "handful of dust."

Right on the heels of Rust Never Sleeps is Live Rust, an all-live recording containing many of Young' earlier songs. It is this added completeness and the period of the recording that gives Live Rust the edge over Rust Never Sleeps in this list of the top ten best live rock albums, though the two may be considered together. Live Rust, was originally released as a double- LP live album, on the streets just four months after Rust Never Sleeps. It was the soundtrack to the concert film recounting Young's Rust Never Sleeps tour and was recorded Oct. 22, 1978, at the Cow Palace in San Francisco. Live Rust reprises four songs from Rust Never Sleeps in different performances. In spite of this apparent redundancy, Live Rust remains an excellent Neil Young live album and retrospective (at least up to its release in 1979), illuminating Young's career from the early "Sugar Mountain" and arriving at then- new songs like the scathing "My My, Hey Hey (Out of the Blue)" and "Sedan Delivery."

...you better call John, 'cause it don't look like they're here to deliver the mail...

The concert documentation begins with an acoustic Neil Young, playing guitar and harmonica. He spins his way through some of his more introspective songs: "Sugar Mountain," "I Am a Child," and "Comes a Time." He then switches to piano to deliver one of his first masterpieces, an anxious and tense "After the Gold Rush." Young then reprises "My, My, Hey, Hey" from Rust Never Sleeps. Enough of the quiet, introspective stuff, Young takes off the Martin, straps on the Gibson and turns it up. "When You Dance, I Can Really Love" and "The Loner" are separated from the remaining electricity by a sound clip from Woodstock and a desolate "The Needle and the Damage Done" and an unplugged "Lotta Love." Finally Young gets serious with a reprised "Sedan Delivery" followed by a sextet of songs that can only be described as corrosive ferocity. "Powderfinger," Young's ode to hopelessness very well may be the greatest country song ever written. While quite traditional harmonically, Young makes the genre radioactive musically and lyrically. This song is simply astonishing and its development is equally astonishing as one listens to the three commercially available versions (available at the time of this release).

On Rust Never Sleeps, we are first introduced to the song and Young sings it with a pensive resignation. The story of a young man faced with overwhelming adversity alone takes the only horrible way out he sees. On Live Rust, Young turns it up a notch and the listener can detect real fear emanate from Young's anguished story. By the time that ten years elapse between Live Rust and Arc-Weld , Young has honed the song to a crystalline clarity, the fear now palpable as a tumor, the terror as clear as traumatic pain. "Cortez the Killer," Zuma's molten tour de force, bubbles and flows effortlessly from Young's black, modified Les Paul, hailing the great and ruthless explorer. The early "Cinnamon Girl" is loud and proud, updated since its infancy. Young's guitar centerpiece, "Like a Hurricane" is next, a Dorian-mode elegy to love, delivered in Young's apocalyptically devastating way. "Hurricane" is an anticlimax that plateau's with the electric hammer of "Hey, Hey, My, My" closing the coffin lid on the Punk Rock era. The show closes the "The Needle"'s other bookend, "Tonight's the Night," a song transmogrified every time young has played it.

...its got numbers on the side and a gun that's making me quake.

A singular talent, Neil Young has out lived and out produced the majority of his contemporaries without losing a bit of his grit and drive. Lyrically, Young is second only to Dylan in theme and design. His acoustic personality has the perfect temperament for internal detection and exposition while his electric music is the best vehicle for his rage and frustration. Young has been widely recorded live, both commercially and by bootleg. The Road Rock series is not old enough to hail a masterpiece (and has yet to be added to) yet nor has it yielded a new performance of "Powderfinger" or "Hurricane" (though "Cowgirl in the Sand is serious in its electric density). Let's hope the series does yield these. But for the time being, Live Rust rules.

Woefully neglected originally were Time Fades Away (Reprise, 1973) and The Year of The Horse (Reprise, 1997). The former was a recording of previously unheard Young and the latter was a demonstration that Crazy Horse could still rock. Young didn't march to a different drummer, he ignored the drummer altogether.

Sugar Mountain; I Am a Child; Comes a Time; After the Gold Rush; My My, Hey Hey (Out of the Blue)When You Dance I Can Really Love; The Loner; The Needle and the Damage Done; Lotta Love; Sedan Delivery; Powderfinger; Cortez the Killer; Cinnamon Girl; Like a Hurricane; Hey Hey, My My (Into the Black); Tonight's the Night.