By MARK SABBATINI
August 13, 2004
Sign in to view read count 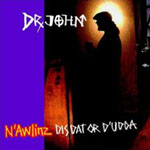 Dr. John is oh, so hip—or at least he tries to be.

His latest "voodoo" album, N'Awlinz Dis Dat or D'udda, a tribute to the drummers of New Orleans, features linear notes expounding on the various "bippin'" "mo" and "dere it t-i-is" talent of well-known players offering their takes on things "down yonder." It's a generally pleasing album held together by a huge and diverse collection of guests, but it suffers the inconsistency almost inevitable with so many different performers. Also, for an album intent on giving the drummer some, contributions of note are surprisingly scarce.

This album is generally at its best doing various bits of groupthink voodoo, found more at the beginning of the album before giving way to more traditional blues that tend not to hold up as well. The up-tempo gospel/Dixie "Lay My Burden Down," haunting "Marie Laveau," and funky "The Monkey" are among those that work as entertaining vocal hooks are boosted almost subconsciously by various ensembles. Dr. John's on target throughout, but he mostly plays a supporting role, as do most of the instrumentalists. Their collective funk almost always feels genuine, but one really has to focus in on the nuances of the drummers to hear their contributions... and this is not an album where subtlety commands attention.

There are a few individual performances that fall short. Willie Nelson seems out of his element as a guest vocalist on two songs. Trumpeter Nicholas Payton provides a nice texture on a duet performance of "Dear Old Southland" in tribute to Louis Armstrong, but there's nothing showcasing the younger player's true ability. The syrupy piano and strings of "Quatre Parishe" is a misguided opening; the same approach works better with some closing vocals at the album's end, on "I'm Going Home."

And maybe there's a hidden requirement that such tributes include "When The Saints Go Marching In," but it really needs to be special to feel welcome. The Doctor gets maybe halfway there with a slow and moody gospel choir treatment supplied by the Davell Crawford Singers. I hate to use the word funeral, but for some reason it reminds me of a New Orleans burial scene from some movie I saw years ago.

Dr. John's got a good crowd for this party and he can still mostly walk the walk, so to speak, although I couldn't quite shake the feeling that either he or I wasn't quite "getting it" when it came to being clear on the concept. Must be a generation gap thing, but the good Doctor still does a better job of bridging it than most.