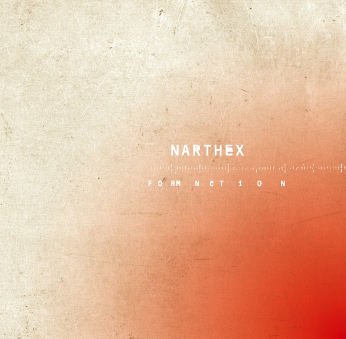 The music on Formnction was produced using unusual experimental methods. The process is described by Narthex—saxophonist Marc Baron and bassist Loic Blairon—in a useful introductory sleeve note. It's worth reading:

"(1) We record six improvised pieces of 30 minutes each, in six different locations, numbered in chronological order from one to six. All pieces were recorded in France by our means. (2) The sound recording process is decided upon the listening experience we have in each location. (3) Each improvised piece is divided into six five-minute long parts. (4) We make a 30-minute piece composed of six excerpts from the six improvised pieces. The first five minutes of the recomposed piece are extracted from improvised piece #1 (from 0:00 to 5:00) ; the next five minutes consist of another excerpt from improvised piece #2 (but from 5:00 to 10:00), and so forth. We thus achieve a 30-minute long instrumental piece, composed of six excerpts in chronological order.(5) We produce a 30-minute digital piece based on improvised piece #4, which we consider suitable for this purpose. The sounds of the saxophone (Marc Baron) and the double-bass (Loic Blairon) are respectively replaced with 1000 and 500 Hz frequencies. The background noise is removed by digital noise cancellation. (6) The digital piece ["-1"] is the first track on the CD because we enjoy the listening experience it provides. We also like the reverse—starting with the acoustic piece ["2"]—and we recommend to try both."

So that's the recipe. How is the final dish? Well, as an album it makes strange listening, with the two tracks contrasting dramatically.

"-1," the electronic piece derived from one of the sax and bass duo improvisations, is a real oddity. Replacing the saxophone by a 1000 Hz tone and the bass by a 500 Hz tone means that we only know when the two instruments were playing or not playing (i.e. were on or off). Details of pitch, timbre and volume that make improvisations interesting are all removed. So one minute of the 500Hz tone indicates that the bass was playing for that length of time but there are no clues in the unbroken monotone as to what exactly was played in that time.

Consequently, the piece is stripped of any sense of interaction between the players and of any emotion or humanity. The listener could also quibble about the choice of frequencies used to replace the instruments; in particular, 500 Hz is far too high to give any sense of it replacing a double bass. Given these provisos, as an electronic composition, "-1" works as intended. Nonetheless, it would have been intriguing to be able to hear it alongside the original recording from which it was derived (maybe one on each channel?)

"2" almost works as intended, but creates frustrations of its own. Its construction of five-minute excerpts from six separate improvisations means that an unbroken run of improvisation is never heard without there being a change. Also, the third excerpt seems to have undergone the same treatment as produced "-1" so the sax and bass are unheard for those five minutes. Although the edits do not jar, there is the feel of the flow and momentum having been disrupted. On the evidence here, Baron and Blairon improvise well as a duo, producing pregnant silences and bursts of noise in equal amounts; it would have been good to hear more of them playing together.

The tragedy of this release is that from the three hours of improvised music that were recorded, none of Narthex's half hour improvisations is heard in its entirety, unaltered. The improvisations have been sacrificed for the sake of experimenting with the methodology. An interesting attempt.