Hamel’s songs are achingly catchy, or sometimes just aching. They often juxtapose deeply sad and even scathing lyrics with happy melodies that sweep you in. Imagine the musical landscape of a lush big band who would play with Frank Sinatra or Peggy Lee set against the emotional palette of Jeff Buckley...

“But at the same time I would like to listen to PJ Harvey, Jeff Buckley, Peggy Lee, who is very sexy and strict and melancholic, but I also like Prince and Carmen McRae”

“By the time I was 17 and finished school I moved immediately out from my parents, not because I didn’t like them, but because I didn’t like the place they lived. I moved to the city of Utrecht.” He applied for a course in literature and journalism but left after the first year. “I was just interested in working for magazines like Vanity Fair and this course was very technical - how to write a news story.” He toyed with the idea of music school. He had guitar lessons and he was compulsively listening to Smashing Pumpkins. He wondered if music school would try to change the style before he had even developed it, but he was unhappy with journalism and decided to apply. “I wanted to make my voice bigger and learn theory so I could write songs. 120 people applied to music school and only four could be accepted, and I was, so that was quite an honour.”

Hamel did five years of music school from 1995-2001. “They did try to change me. Everyone who warned me was correct. But at the same time, what a blessing to do music every day. I came to the institute with this light airy voice. They tried to make me a crooner. I sang everything from old jazz to bossa nova. The drew out a voice that I had in me that perhaps I would never have known. It took me a while to learn what I should drop and what I should keep. It took me a while to redevelop my own style.” What he gained in knowledge he seemed to have lost in confidence. That feeling of knowing who he is in his own skin. When he left music school he began working as a singing teacher. It would be four years before his friends would even hear him sing. “My singing technique was really good. Because of all the singing lessons I gave people I learnt a lot, but I was really insecure. The new people I met never heard me play or sing. I didn’t go to jam sessions any more. One day I saw an advert in a newspaper for a Dutch jazz vocalist competition. I jokingly said I could win. I didn’t really believe I could...” But of course he did and he began to realise the conservatory had given him an amazing background. He didn’t have to sing jazz standards. “Gradually I got rid of my inhibitions and I began to write songs.”

By 2006 he had a record deal with the Dutch label Dox Records. “I was exhilarated, especially at the thought of me working and collaborating to write songs.” He began to collaborate with Benny Sings, a producer and member of the 'Dox Family' with whom he still works. “I knew about chords and melody, but I didn’t know how to make a beat and how to make something work and how to make a sound, but Benny did.” Hamel’s sound is unusual, a complex mixture of inspirations. One of his mentors was Jon Hendricks, American jazz legends, and he did workshops with him. “But at the same time I would like to listen to PJ Harvey, Jeff Buckley, Peggy Lee, who is very sexy and strict and melancholic, but I also like Prince and Carmen McRae.” From his own influences he learnt how contradiction and paradox forms the most powerfully crafted songs. The tunes are uplifting and the words are sad. Curiously that makes the tunes seem even happier and the words sadder. “I have discovered that music is my therapy. Through my writing I have discovered more about my light and my dark sides. Musically it might be called melancholic, a kind of nostalgia for a beautiful place you once had. If I went through my playlist of my favourite songs, lots of them would be melancholic. Sometimes the greatest songs are never the happiest, they are ones that affect you, that make you embrace life with all of its happiness and sadness. “Sometimes the things that make me happy also make me sad. Playing live - it’s exciting and terrifying. Music makes me happy.” But often musically he’s expressing sadness.

How is Hamel in love, happy or heartbroken? “Both. I don’t believe that love makes you happy. I believe in relationships and being in love, but I think you always keep longing for something you can’t explain and perhaps romanticise past relationships. I don’t analyse the lyrics when I’m writing them... only after. From my songs you can tell that in love I’m usually the one who is dumped rather than the one who dumps. And although that’s true and I might embrace that moment, I’m also very lucky in that now I’m very happy. It seems that I put all my melancholy in my songs.” Show less 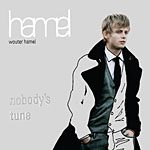 All About Jazz musician pages are maintained by musicians, publicists and trusted members like you. Interested? Tell us why you would like to improve the Wouter Hamel musician page.