Victor Dey Jr - named after his father - is a Ghanaian Jazz pianist, composer, producer, arranger and … teacher. Together with his partner in crime, saxophone player Bernard Ayisa, he is the driving force behind the growing Jazz scene in Ghana’s capital Accra with new talents emerging under their inspirational guidance.

Dey started nurturing his talent from a very early age onwards, as his father insisted he learned music keeping him away from distractions as TV and Games. Music has always ruled his life, for as long as he can remember. Dey has become somewhat of a celebrity in Ghana and even outside. CNN featured him in an African Voices episode, CGTN has aired an interview with him introducing his album “Makola” and in 2014 he was awarded Instrumentalist of the Year at the Vodafone Music Awards.

He spent 5 weeks in Boston in 2007 where he attended the Berklee Summer Performance Program on a scholarship from Rita Marley who is living in Aburi just outside Accra. You can find him every week on Tuesday nights at the +233 Jazz Bar and Grill in Accra where he plays with the Frank Kissi Electric Band featuring - apart from band leader and drummer Frank Kissi - Bright Osei on bass, Bernard Ayisa on Sax and Joseph Bannor on percussion.

Special guests as singer Sandra Huson, Nicolas Genest and many others regularly join the band. After the break the stage is open for emerging talents, like trumpet player Peter Somuah and guitar player Napoleon Nartey, and established artists like trombone player Elikplim Amewode and drummer Dani Black to come and jam.

The Dey-Ayisa band has often been the residential band at the yearly Stanbic Jazz festival in Accra. If he is around and you are in Accra and want to check him out, you cannot miss him. Over the years he has shared the stage with a number of renowned artists like Stevie Wonder, Courtney Pine, Mike Phillips, Hugh Masakela, Ray Allen, Gyedu Blay Ambolley, Maurice Brown, Cecilia Smith, Corey Wilkes and Nii Sackey amongst others.

In 2017 he released his first full album, ‘Makola’, referring to the famous market in central Accra. He is now working on a new album which he will release as soon as he has the time to finalise it.

Whatever one was looking for, or not, this gifted pianist stunned his fellow artists, like pianist Afrika Mkize, whose fits of bowing and ululations later over drinks in the Hall’s cozy outdoor (and heated) bar foyer drew obvious attention.”

Victor Dey Jr has taught and keeps on teaching many musicians who want to hone their skills as Jazz musician and instrumentalists. Some of the musicians he taught: Elikplim Amewode, Daniel Tettey Black, Frank Kissi, Bright Osei, Peter Somuah, Napoleon Nartey ...

Workshops with Victor Dey Jr give attendants what they want: practical tips that improve musicians knowledge as well as skills. The US embassy is funding yearly jazz workshops taking him to Ghana cities like Kumasi, Cape Coast, Takoradi etc apart from Capital Accra. The 2018 workshops, the first of hopefully a long series of workshops facilitated by the US Embassy, were lead by Ben Boone, renowned US jazz composer and sax player. 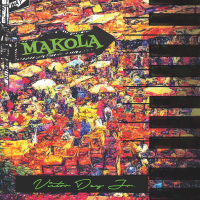 All About Jazz musician pages are maintained by musicians, publicists and trusted members like you. Interested? Tell us why you would like to improve the Victor Dey Jr. musician page.