When the combustible four-man force of musical nature known as Turning Point took over the Phoenix club scene in the mid-90s, the desert city's nights truly became as steamy as its days. Establishing itself before packed houses at hotspots like The Famous Door and Beeloes, and later becoming regional sensations playing some 200 dates a year, the band grew to embody the freewheeling creative spirit of indie music. Drawing on each member's musical and cultural background, Turning Point forged an eclectic sound that mixed progressive jazz with rock, R&B and blues, with touches of Greek music and--paying homage to their home in the Southwest--Latin jazz. The title of Matador, Turning Point's Native Language debut and sixth album overall, perfectly captures the band's bold evolution into a true rock instrumental powerhouse.

"We've always strived to be diverse in everything we do, and Matador is the best example yet of this no holds barred approach," says guitarist Thano Sahnas. "Since we never stop performing, we're able to try out every brand new song onstage to see what works best. Audiences will literally hear our songs for a year before we officially record them, and it's fun to watch as they evolve. A bullfight is a fight to the death. A bullfight is a fight to the death, and there's definitely a double entendre in the title. We're out there fighting every day, and we're going to win."

The four members of Turning Point--Thano Sahnas, his brother Demitri Sahnas (acoustic and fretless bass), keyboardist Steve Culp and drummer/percussionist John Herrera--faced a lot of flak in their early years for creating a genre practically unto themselves defying music industry convention. This initial resistance inspired them to push the envelope even further, and the payoff with audiences has been phenomenal. Their music appeals to fans of many of the top rock, R&B and smooth jazz artists they have opened for, from Michael McDonald to Little Feat, chill performer Praful, acid jazzers Down To the Bone and The Rippingtons.

Turning Point has received acclaim for all of its previous releases, beginning with a self titled debut in 1995 and including A Cool Jazzy Christmas (1996), Together (1998), Bridges (1999) and A Thousand Stories (2000), which was produced by famed bassist Brian Bromberg and released nationally by A440 Music. Together earned the band its largest national audience, receiving airplay on more than 40 smooth jazz stations. Yet the eleven tracks on Matador capture the band on the cusp of reaching its creative potential, and the addition of saxophonist Dominic Amato as a featured player on the record has allowed Turning Point to stretch their musicality even further.

Two of Matador's most heartfelt tracks were inspired by powerful events: the electric guitar driven pop/rock anthem "Here Today, Gone Tomorrow" by the 2003 Space Shuttle Columbia; and the seven and a half minute "Soldier's Lullaby" by the war in Iraq . "The intent was to create a musical feeling of what a soldier might be feeling in his soul, heading out to battle while wishing he was home, able to sing his baby to sleep," says Thano Sahnas. "Imagining entry onto the battlefield itself, the tune becomes more aggressive, with time signature changes throughout to create a subliminal tension. It's compositionally unique."

"Compositionally Unique" is an apt description for Matador's other tracks, from the trippy electro-fusion funk opener "Lickety Split" (featuring DJ Mister Best on cuts and scratches) to the easy thumping bluesy moods of "Gospel Brunch," the expansive, soulful romantic ballad "Turn Down The Night" and the lively, retro-soul and blues tinged "Suburban Safari."

Each member of Turning Point brings unique personal musical influences to the band's sound. The Sahnas brothers grew up playing in Phoenix rock bands at the same time they played traditional Greek folk music; they recently released a side project Mykonos to Madrid on Moondo Records, in association with Native Language. Herrera played in variety bands in his native New Mexico , covering the gamut from country and rock to R&B and Mexican music. Yuma, Arizona native Culp had a similar border town musical background, and went on to receive a Master's Degree from the University of Miami Music School. Growing up in Detroit , Amato couldn't help but develop an affinity for all things R&B.

Each member brought a resume chock-full of studio gigs and performing with other groups, and when they got together, a rockin' contemporary jazz style emerged naturally. "We met in studio circles in Phoenix , and we just thought it would be fun to collaborate on some songs," Herrera says. "We'd all been backing up various vocalists but none of us could sing a lead vocal to save our lives. So it was either do instrumental music or pack it in. That was in 1994."

Writing and playing the songs turned out to be easier than picking a name for the group, a process, which took two months. In the end, the name was elemental because each member began to feel that this new band was the "Turning Point" in his career. Turning Point took its self-produced, self-released debut to Phoenix's National Public Radio station KJZZ and the response was phenomenal. The band made its debut at an album release party benefit for the station. Tracks from nearly all of Turning Point?s earlier recordings received heavy airplay by Phoenix 's smooth jazz station KYOT (The Coyote).

"The reason we're successful is that we are committed to having fun, no matter what," says John Herrera. "Although we never came at this with a true mission statement, each of us has always understood what this band is about, playing the music we love in an open artistic forum that gives each of us a chance to contribute. More than on any previous album, we feel that Matador truly shows our acquired strengths. We've always had a good time, but now our playing is much stronger and we do it with more conviction." Show less

Ralph Peterson Trio Opens the 3rd Season of "Jazz at the Turning Point... 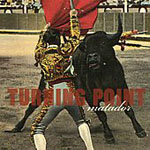 All About Jazz musician pages are maintained by musicians, publicists and trusted members like you. Interested? Tell us why you would like to improve the Turning Point musician page.