TIM LEKAN (bass) began his musical journey touring the United States playing electric bass in R&B bands. His love of jazz and the work of masters such as Charlie Haden, Paul Chambers, Red Mitchell and Ray Brown eventually led him to the acoustic bass. He has studied with New York bassists, Scott Lee, Michael Moore and Dennis Irwin, and has studied composition with pianist/composer Ron Thomas. A native of Cleveland, Tim lived and worked in New Jersey from 1986-1998, playing with numerous groups, including The George Mesterhazy Trio and Oscar Brown Jr. In the fall of 1997 Tim released his debut CD "P.M. The Tim Lekan Trio with special guest Gina Roche" on Encounter Records. His group has performed at numerous jazz clubs and festivals throughout the Tri-State area. In 1999, Tim moved to New York City where he has resumed his study of the acoustic bass with Andy McKee, while continuing to lead his own group and work as a freelance bassist.

JIM RIDL (piano) originally from North Dakota, now resides in New Jersey and is much sought after as a creative and innovative pianist/composer/arranger. In addition to The Antfarm Quartet, Jim performs live and in the studio with the Jim Ridl Trio and Quintet, the Dave Liebman Big Band, in duet with Diane Monroe, the Denis DiBlasio Quintet, the JD Walter Quartet, and the Manhattan Bones. Jim has recorded 5 critically acclaimed cds, the latest "Your Cheatin' Heart and other works" recently released on the Dreambox Media label. Jim has been recognized by Downbeat and Jazz Times, and was featured in Piano and Keyboard Magazine, "a fresh, individual voice in jazz piano...sure to make among the first indelible marks in the jazz millennium." 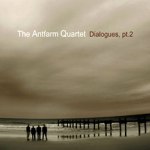 All About Jazz musician pages are maintained by musicians, publicists and trusted members like you. Interested? Tell us why you would like to improve the The Antfarm Quartet musician page.