Sun Trio was born after The Louhivuori brothers made an Asian/Australian tour as a duo which included a different bass player in every city. The tour was such a big success that Olavi and Kalevi (J.K.L) decided to create a new band with bassplayer Antti Lötjönen as a regular member. Sun Trio has already two albums under their belt, both released by the famous Italian/American label, Cam Jazz Records, which has recorded such prominent musicians as Kenny Wheeler and Chick Corea.

J.K.L has played with the world’s top-musicianssuch as Dave Liebman, Al Foster, Christian McBride, Bob Mintzer among others. He works in numerous different bands & productions and is the leader of The Northern Governors, Sun Trio and J.K.L Quintet.

J.K.L is a composer, arranger, lyricist, producer and a singer. He writes music for all kinds of bands and his music varies from jazz to pop, from classical to afro-beat, from big bands to choirs and orchestras.

Olavi Louhivuori (b. 1981) graduated from the Jyväskylä Conservatory’s jazz/pop department in 2002 and was admitted to the Jazz Department of the Sibelius Academy, Finland’s only university level music academy, that same year. Besides instrumental studies, Louhivuori has also studied composition with Sonny Heinilä and Matthew Whittal. In recent years, Louhivuori has been composing music for various line-ups ranging from small jazz groups to strings and orchestral pieces for big bands.

Louhivuori grew up surrounded by music and musicians. His father works as a professor at the Jyväskylä University Music Department and his mother is a violinist and a music pedagogue. All of Louhivuori’s four siblings play an instrument. While still living in his hometown Jyväskylä, Louhivuori began playing with local musicians and participating in the famous jam sessions of now defunct Jazz Bar.

Louhivuori first became known to the broader audience through the Joona Toivanen Trio (with pianist Joona Toivanen and bassist Tapani Toivanen) that has issued four recordings and Ilmiliekki Quartet (with trumpeter Verneri Pohjola, pianist Tuomo Prättälä, bassist Antti Lötjönen) that has issued two recordings of its own (March of the Alpha Males, TUM CD 005 and Take It with Me, TUM CD 020) and also an album with vocalist Emma Salokoski (Vi Sålde Våra Hemman).

In addition to co-leading the Olavi Trio and Ilmiliekki Quartet, Louhivuori leads his own group Oddarrang, a quintet comprised of trombone, cello, guitar, bass and drums (with Ilmari Pohjola, Osmo Ikonen, Lasse Sakara and Lasse Lindgren, respectively) that was awarded the Jazz Emma as the best jazz record of the year for 2006 (Music Illustrated). Louhivuori also performs with the Alexi Tuomarila Trio (with pianist Alexi Tuomarila and bassist Mats Eilertsen) and Sun Trio (with trumpeter Kalevi Louhivuori and bassist Antti Lötjönen). Of these early groups, the Joona Toivanen Trio (2000), Ilmiliekki Quartet (2002) and Sun Trio (2006) were all winners of the Nordic Jazz Comets competition.

Louhivuori has also frequently performed with Polish trumpeter Tomasz Stanko in various combinations and, beginning in 2009, has been a member of the Tomasz Stanko Quintet (with pianist Aleksi Tuomarila, guitarist Jacob Bro and bassist Anders Christensen) that has released a well-received album (Dark Eyes) in ECM Records. He has also performed with the UMO Jazz Orchestra and with such well-established musicians as saxophonists Anthony Braxton, Joe McPhee, Jukka Perko and Sakari Kukko, pianists Marilyn Crispell and Samuli Mikkonen and vocalists Susanne Abbuehl and M.A. Numminen. Louhivuori also performs regularly as a solo drummer, and released a solo album in 2008 (Inhale-Exhale)

Bassist Antti Lötjönen may have appeared on the scene with the Ilmiliekki Quartet in 2002, but the fact is that his undisputed talent would have become noticed soon anyway. To prove this statement one mustn't look further than to the year 2003 when the man was recruited in the ranks of the Five Corners Quintet live outfit.

These hotter that hot groups aside, Lötjönen is favoured by pianist bandleaders like pianists Alexi Tuomarila and Joonas Haavisto. He is the bassist of choice of saxophonist Timo Lassy and trumpeter Jukka Eskola, both of whom are also members of the Five Corners Quintet.

The best representations of Lötjönen's style in the recorded form are the Ilmiliekki Quartet's instant classic 'March of the Alpha Males' from 2003 and its follow-up 'Take It with Me' from 2006 and Sun trio´s “Dreams Are True” in 2011. Jazz aside, Antti Lötjönen has tried his hand at ethno music with Värttinä and experimental rock with the band Silvio. Among the bassist’s latest endeavours is trumpeter and Ilmiliekki leader Verneri Pohjola's project 'Aurora'.

With Sun trio Antti has revealed his talent as a composer and you can hear his music in the newest album of the trio: “Dreams Are True.” Show less

Enter the "Sun Trio - In the Dreamworld" Giveaway!

”The Sun Trio might be said to approximate the style of British artist David Hockney.” —All About Jazz 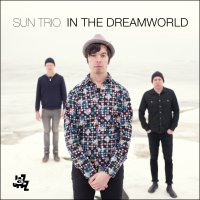 From: In the Dreamworld
By Sun Trio

All About Jazz musician pages are maintained by musicians, publicists and trusted members like you. Interested? Tell us why you would like to improve the Sun Trio musician page.