The Sophia Smith Quartet combines a mixture of traditional jazz elements with original modern jazz compositions. Sophia’s compositions create a unique blend of memorable melodies, lush harmony and improvisation, inspired by the compositions of Kenny Garrett, Chris Potter and Pat Metheny. The bright, yet warm sound of Sophia’s alto saxophone lends to the feel-good vibe of her compositions, which leave audiences uplifted. Listeners often describe the quartet’s music as unique since it appeals to many different musical tastes - it is rooted in the jazz tradition and has a deep exploration of structured and free improvisation, but at the same time, it has a fresh twist that is accessible to music lovers of all kinds due to the intriguing, sing-able melodies and pleasing sonorities. Meeting in Toronto, the quartet was formed in 2017 and features a diverse group of musicians all active in the Toronto music scene, including Iranian-Canadian piano player Amir Mehrabi, Indian drummer Agneya Chikte and Guelph-raised upright bass player Sam Fitzpatrick. After performing around Toronto, the quartet recorded their debut album, Elevation, which features eight original modern jazz tracks and was officially released on all platforms on March 14th, 2020.

Read more articles
"...a unique blend of modern jazz, with a foot in the tradition and the other going forward, and beautiful little melodies, that, together with her clear sound on the alto makes the music positive and uplifting. The groups improvisations, as an ensemble or individual, are faultless and are enhancing each composition. A very promising debut album from a band to watch out for!!!!" - Wulf Muller, All-In-Music Service 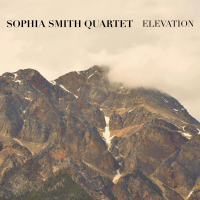 Part III. A Flat Boat is a Fast Boat

All About Jazz musician pages are maintained by musicians, publicists and trusted members like you. Interested? Tell us why you would like to improve the Sophia Smith musician page.