Sergio began playing at a very early age and was performing in public by the time he was four. His father, Luciano Salvatore, is a music teacher who majored in classical piano at Boston University and the Berklee College of Music. After teaching at Berklee for five years, Luciano created his own music school North Jersey Music Labs, which specializes in teaching improvisation. It wasn't long before Sergio became his father's star pupil.

Early in 1992, a home video of one of Sergio's performances came to the attention of the Director of A&R at GRP Records. A live audition at the Salvatore household followed soon after resulting in the recording of Sergio’s self-titled debut album for the label, cutting seven original tunes and receiving critically-favorable response to the record.

The 1994 follow-up on GRP, Tune Up, included compositions by Miles Davis, Charlie Parker, Wayne Shorter, and Chick Corea and led to appearances with the American Jazz Philharmonic and to performances in Japan, Italy, Canada and at selected venues in the U.S. including Carnegie Hall and the Ravinia Jazz Festival. In 1996, Sergio recorded Always A Beginning, an all-acoustic album for Concord Jazz Records that featured his keyboard artistry in a trio setting, alongside bassist John Patitucci and drummer Peter Erskine. Subsequently, Always A Beginning was selected as one of JazzTimes magazine’s favorite albums of the year.

Recently, Sergio has been writing music for a variety of settings including solo piano, trio, and quintet. His new trio been focusing on new material and performing throughout the world. Mr. Salvatore also holds a Bachelor of Science degree in computer science from Worcester Polytechnic Institute in Worcester, Massachusettes. Show less 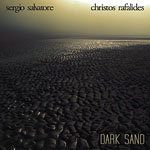 All About Jazz musician pages are maintained by musicians, publicists and trusted members like you. Interested? Tell us why you would like to improve the Sergio Salvatore musician page.