Sean Nowell is a tenor saxophonist and composer from Birmingham, Alabama steeped in the southern traditions of blues, gospel, jazz, and funk fused with the complex harmonic and world rhythmic concepts that permeate the music of New York City. While in Alabama, he sang in cathedrals with a national touring a cappella choir and was exposed to vocal music from Germany, Eastern Europe, and Africa. He received a BA in Composition from Berklee College of Music in Boston in Jazz Composition and a MA from Manhattan School of Music in New York in Performance. He has composed and improvised film scores, music for ballet and theatre, 20th century classical music, big band, and small jazz ensembles and has pushed the timbral boundaries of the saxophone, flute, bass clarinet, and Udu (Nigerian clay pot drum) by integrating electronic effects pedals with those acoustic instruments. He has traveled and collaborated with dancers, actors, painters, stilt walkers, and acrobats on multiple tours of China, Bulgaria, Kosovo, Macedonia, Bosnia, Serbia, Romania, France, Germany, Hungary, Holland, Belgium, Colombia, Venezuela, Singapore and the United States as Musical Director for Bond Street Theatre over the past decade. He’s participated in united clashing religious and ethnic groups in Kosovo through music and has been proud to serve as an unofficial artistic ambassador for the United States by exchanging social and artistic ideas and holding master classes in these countries on American Jazz, learning the folk music of the regions, and then incorporating it into his compositional and improvisational style. He has had performances with Reeves Gabrels (guitarist, David Bowie Tin Machine), Tim Lefebvre (bass, Rudder, Saturday Night Live, Chris Botti), Donny McCaslin (sax, Dave Douglas), Anton Fig (drums, David Letterman, everyone else from the past 25 years!). He also recorded with Stanley Clarke and George Duke for the movie “Soul Men” starring Bernie Mac and Samuel Jackson and co-wrote the score for the Nick Nolte movie “Off the Black”.

Sean Nowell has been a motivating force in the New York City jazz community for the past 12 years by hosting weekly jazz composers forums in Manhattan and Brooklyn clubs that consistently showcase the freshest and most cutting edge jazz in the city, as well as collaborating and recording with the next generation of jazz, funk, and avant-garde masters.

His first release, “FIREWERKS”, was born from these weekly sessions and has garnered critical acclaim for the band's highly interactive and rhythmically adventuresome approach that got him immediately signed as a Posi-Tone Records Recording Artist.

Every track on his second release for Posi-Tone Records, “THE SEEKER”, is an expression of the fantastic and dangerous experiences collected over the past decade of exploring the less traveled corners of the planet as well as his journey toward self realization and features Dave Eggar on Cello (Evanescence, Michael Brecker, Chris Potter) and Nir Felder on Guitar (Greg Osby).

Sean is also part of some of the most creative, forward thinking ensembles in the city including Travis Sullivan’s Bjorkestra (all Bjork jazz-tronica big band), The Delphian Jazz Orchestra, the Yutaka Uchida Quartet and performs regularly in the top jazz clubs in New York City including the Blue Note, Smalls, The 55 Bar, The Jazz Standard, BB Kings, Birdland, Cleopatra's Needle, the Knitting Factory, and Zebulon as well as international jazz clubs such as Club JZ (Shanghai), CD Jazz (Beijing), Café Plato (Belgrade) and has played the JVC Jazz Festival, the San Francisco Jazz Festival and for 30,000 people at the Montreal Jazz Festival. Show less

“Sean Nowell is my preferred kind of tenor player: quick, smart, tough, and counter intuitive. He is the real deal” - Thomas Conrad

“Tenor Saxophonist/Composer Sean Nowell fuses introspective melodies, darkly hued harmonies and angular rhythmic structures to create a sound that has succeeded at melding, morphing and mixing the best of Blue Note-era small group nirvana with the Headhunters’ pocket and vibe, evolving it to Right Now.” - All About Jazz

“Cerebral music, but played with soul and feeling; ballads that somehow build into frenetic climaxes.” - the Manhattan Times

“Nowell's first solo shows his big-tenor influences and up-to-the minute chops, punctuated by tasteful over- blowing running perfectly counter to the gutbucket jam, then growing Brecker-esquely dense.” - All About Jazz

“Nowell plays with a mellow tone, swings hard, and sidles up to Coltranian heights….” -the Manhattan Times

currently teaching alot in connecticut. i have 10 years of private student experience and a bunch of excited students. 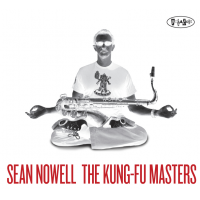 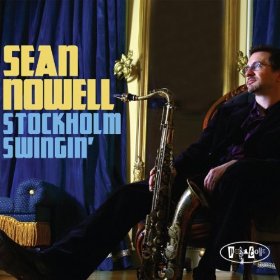 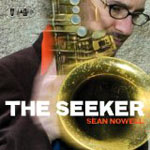 For All Intensive Purposes

From: The Seeker
By Sean Nowell

All About Jazz musician pages are maintained by musicians, publicists and trusted members like you. Interested? Tell us why you would like to improve the Sean Nowell musician page.