In basketball, Rob Whitlock would be known as “the sixth man,” the first player to come off the bench and the one expected to sink key baskets during crunch time. In baseball, he’d be “the utility player” who can play almost any position in the field day-after-day and can be counted on to connect when up at the plate. In the world of acting, Whitlock would be described as a “character actor,” someone who delivers a memorable and pivotal performance while occasionally stealing scenes from marquee stars. Now, through a two- part series of musical sketches that incorporate a variety of genres, the keyboardist- producer-composer proves that he is indeed ready for his close-up. And this time, the stellar cast is supporting him.

With more than two decades in music, Whitlock is a “musician’s musician” who has performed and recorded with a diverse array of top artists in pop, R&B and jazz. He’s a much sought after Hammond B3 organist, who also plays piano and keyboards in addition to producing, writing and arranging. Over a two-year span, Whitlock was joined in recording studios all over the U.S. by just a few of his friends to work on an eclectic music project called Sketchin’. Along with Michael Brecker, Vinnie Colaiuta, Anthony Jackson, Scott Henderson, Othello Molineaux, Pat Kelley, and Cliff Almond, Whitlock recorded enough material to populate two albums. Sketchin’ was released nationally last fall on the artist’s own Sketchin’ Records label. Sketchin’ 2 is scheduled for release this spring.

On the albums, the legendary saxophonist and eleven-time Grammy winner Brecker said, “It was a joy to be a part of the Rob Whitlock project. In addition to his being a fantastic player/composer, Rob has a knack for bringing out the best in the musicians with whom he plays. This was fun.”

Born in West Virginia, Whitlock grew up in South Florida where he started playing the Hammond B3 at the age of eight. His father, Bob, was a respected local jazz guitarist who encouraged his son to perform whenever his professional musician friends were over at the family house. Through his father’s record collection, he was introduced to artists like Jimmy Smith, Wes Montgomery and Charlie Parker. On his own, he discovered the music of Herbie Hancock, George Duke, Chick Corea, Miles Davis and Jaco Pastorius. While he was a teenager, Whitlock learned how to make a living gigging on the Ft. Lauderdale/ Miami scene by playing keyboards and bass. When he was 17, he met Pastorius, who used to spend time learning from Bob Whitlock. The circle of learning perpetuated itself as Pastorius went on to become one of Rob’s greatest musical influences.

After living in Washington, DC for three years, Whitlock moved to San Diego when he was 25. He believes that having lived on both coasts has helped shape and lends texture to his music. Whitlock landed gigs touring with the Jazz Crusaders, A.J. Croce, the Dazz Band and Fattburger. Over the years, he’s recorded and/or performed with Joe Sample, Joe Williams, Rita Coolidge, Kathie Lee Gifford, Tom Scott, Eddie Harris, Max Bennett, Miki Howard, Grant Geismann, Jeff Kashiwa, and, of course, Pastorius.

While he was playing, producing, writing and arranging for others, Whitlock was always writing material that he hoped to record himself one day when the time was right. He composed or collaborated on four new songs for Sketchin’ 2 while producing and arranging the entire album. The second disc is a bit edgier and has a “retro jazz” feel. Musically, Whitlock challenges listeners by presenting compositions culled from traditional and contemporary jazz, blues, and fusion. Sometimes his keyboard artistry leads and other times he takes a back seat to allow a sax, a guitar or a vocalist to pilot the track. The production is warm and organic because Whitlock feels that performing these songs live is what it’s all about. “We were really careful not to overproduce (the tracks),” Whitlock explained. “While the music is diverse, I tried to make sure that it was accessible and palatable for the average listener.”

Sketchin’ 2 opens with the aptly titled “2nd Service,” which sets the stage for the expansive music mix to follow. Rob’s wife, Amber Whitlock, contributes a stunning rendition of “Them There Eyes,” originally made famous by Billie Holiday. Henderson lets his guitar rip with abandon on the bluesy “Gotta’ Insulator.” “Cold Duck Time” is a jazzy blues number. The fusion scorches on the rollicking and frenetic “At Freedom Chicken

Dance.” A heartfelt version of Rodgers & Hammerstein’s “Do I Love You,” which Rob dedicates to his wife, slows the tempo dramatically. The album closes with “The Colours Of Life” (instrumental reprise), a beautiful, sensitive piano and sax duet between Whitlock and Brecker that will be the first track serviced to smooth jazz radio stations.

Whitlock enjoys merging his music with art. Sketchin’ contains images of Whitlock that amazingly were created on an Etch A Sketch. Jaco’s son, Julius Pastorius, did the album artwork for Sketchin’ 2, which is comprised of a series of intricate sketches of the musicians captured in the recording studio. The concept was for the illustrations to tell a story of the music and the musicians involved like album artwork often did in the days before music videos. However, to please the video inclined, both albums are enhanced CDs that contain still photos and sketches from the recording sessions set to music in a video format.

Recently Whitlock finished production on The Circle, Amber’s second album, which will be unveiled this summer. In the meantime, he’s looking forward to taking his own band on the road to perform music from the Sketchin’ series live. “These collections of music are a labor of love: love of music, of fellow musicians and their gifts, and for the music enthusiast whom I hope will enjoy this album,” said Whitlock. For an ambitious and gifted career musician who is open to wherever his musical sketches may lead, there’s no telling which direction his next project may go.

Keyboardist Rob Whitlock Backed by a Stellar Supporting Cast on... 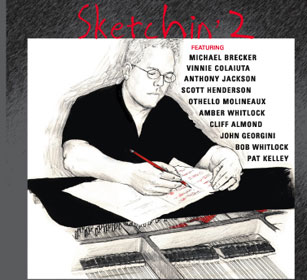 All About Jazz musician pages are maintained by musicians, publicists and trusted members like you. Interested? Tell us why you would like to improve the Rob Whitlock musician page.