Reza Saleh is an exceptional bassist and musician with a passion for jazz, music and the arts.

Reza’s simple, integrated approach emphasizes chord progressions, riffs and harmonies, resulting in distinctively intelligible, enjoyable music that everyone can appreciate. His compositions and performances leave listeners and audiences impressed and delighted. With recordings of his work and performance clips available on YouTube, Facebook and featured on several podcasts, Reza’s enthusiasm speaks for itself.

Originally from Indonesia, Reza became interested in playing bass when he was 12. After his father, the late Usmawi Saleh, challenged him to learn as many rhythmic variations of the 12-bar Blues as possible, and with his older brother, Emir, playing piano, Reza was captivated. With after-school jamming as an everyday practice with his family, Reza developed impeccable skills. By the time he caught an Earth, Wind and Fire performance—which convinced him that music could be thrilling both to create and consume—Reza committed to music as a way of life.

He came to America, where he was named the Long Beach Jazz Festival’s Best Jazz Star Search Artist in 2006. Reza has since played the festival circuit and opened for top acts, including Peter White, Ray Parker, Jr., and the Brand New Heavies

Reza, who still plays his Yamaha bass, is currently writing and composing his album, First Step.

Reza Saleh bass, electric
On the rhythmically vigorous “bassment” bassist Reza Saleh is using his composing abilities and strong sense of rhythm to create and irresistible piece of high-energy funk full of punchy soft lines that culminates with an inventive improvisation that makes you cheer and dance �" Stephen Bocioaca @ JazzWorldQuest.com 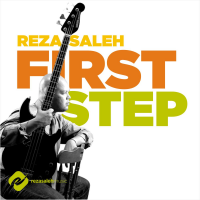 From: First Step
By Reza Saleh

All About Jazz musician pages are maintained by musicians, publicists and trusted members like you. Interested? Tell us why you would like to improve the Reza Saleh musician page.