Pianist, composer, arranger, educator and collaborator Rebecca Nash defies categorisation. Established as one of the brightest and boldest jazz talents in the UK, she is just beginning to garner international recognition for her wide-ranging music which draws on influences from electronica, rock, drum and bass, soul-jazz, and singer-songwriters to create a distinctive personal sound full of artistry and heart.

Alongside her gigs with ATLAS, Nash performs as part of several ensembles, including saxophonist Dee Byrne’s Entropi and two projects led by trumpeter Nick Walters – the Nick Walters Quintet and The Paradox Ensemble, (22a Recordings, EFPI records). Nash also works closely with the acclaimed singer-songwriter, Sara Colman, with whom she is preparing to record an album following their dual 2020 Sage Summer Studios Artist in Residency in Gateshead.

As a composer, Nash’s range of projects reflect the diversity of her interests and the industry’s growing excitement for her sound. She is currently artist-in-residence at The Royal Birmingham Conservatoire, an ideal sandpit for her multidisciplinary approach. In 2019 she was invited to write the first Rising Star Commission for the Bristol Jazz Festival, which will be recorded and released as the album Redefining Element 78 later this year, featuring the eminent American saxophonist John O’Gallagher. In September 2020 Nash was also awarded a Jazz South Radar Commission, and her new electronic project with Nick Walters will be broadcast and released this November.

Musical highlights across the country include the EFG London Jazz Festival, Cheltenham Jazz Festival, Marsden Jazz Festival for BBC Radio 3, Manchester Jazz Festival, and Glastonbury Festival amongst others. She regularly plays at major jazz clubs nationwide, was recently chosen for the TAKE FIVEtalent development programme run by Serious, in 2018 made an Honorary Associate of the Royal Welsh College of Music and Drama. 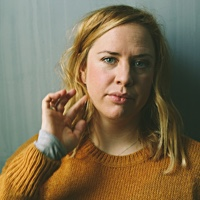 All About Jazz musician pages are maintained by musicians, publicists and trusted members like you. Interested? Tell us why you would like to improve the Rebecca Nash musician page.