Ray Bauduc's New Orleans origins instilled in him a love for two-beat drumming, which he retained even when he played with Bob Crosby's swing era big band. He was a was a hugely popular and influential jazz drummer best known for his work with the Bob Crosby Orchestra and their band-within-a-band, the Bobcats, between 1935 and 1942. Chick Webb always said Ray is a natural drummer and was reportedly Chick's favorite drummer to listen to. Bauduc was a tremendous influence on Art Blakey.

Before the popularity and prominence of his Crosby days, Bauduc had worked with Johnny Bayersdorffer, Eddie Lang, Joe Venuti and Freddie Rich, in whose band he was also featured as a dancer. In 1928, he joined the Ben Pollack band when Pollack decided to give up drumming and simply lead. When the Pollack band dissolved and became one of the few co-operative bands in jazz, under the nominal leadership of Bob Crosby, Bauduc was among its most important members.

Unlike the majority of bands of the era, which usually played in 4/4 time, the Crosby band was spurred on by Bauduc's lively 2/4 drumming. Extensively featured with the band (and in the spin-off small groups, the Bob Cats and Four of the Bob Cats), Bauduc's most memorable moment of glory came when an encore at the Blackhawk Ballroom found just him and bassist Bob Haggart improvising a tune during which Haggart whistled and Bauduc drummed on the strings of the bass

. The result, Big Noise From Winnetka, was one of the band's biggest hits.

Another popular success, South Rampart Street Parade, was also a co-composition by Bauduc and Haggart (written on a tablecloth at the New Yorker Hotel). Bauduc's regular feature with the band, The Big Crash From China, provided an excellent example of his intelligent soloing and superb cymbal work. After leaving Crosby when the band broke up in 1942, Bauduc worked with Jimmy Dorsey, Jack Teagarden and others and in the '50s became co-leader, with former Crosby-colleague Nappy Lamare, of a popular west coast-based band.

Ray Bauduc was a trend setter in traditional jazz circles. His precise, disciplined, yet fiery patterns and syncopated fills helped New Orleans drummers make the transition into swing from the rigid, clipped progressions that had defined the previous era. The son of the great cornetist Jules Bauduc, his brother Jules Jr. taught Bauduc drums. His sister was also a musician, a pianist. Bauduc's first professional job came with a band that accompanied films.

Bauduc served in the U.S. Army Artillery Band until November of 1944. Upon his discharge he and former Crosby group leader Gil Rodin formed a short-lived big band. Bauduc toured with a septet in 1946 and also worked in Tommy Dorsey's orchestra from August to October of the year. In early 1947 he joined Bob Crosby's new group, leaving in 1948 to play with Jimmy Dorsey, where he stayed for the next two years. He freelanced on the West Coast for a couple of years before joining Jack Teagarden in 1952.

In 1955 he formed a band with fellow Crosby alumnus Nappy Lamare. The new outfit found considerable success, touring nationally and recording several albums. He retired to Bellaire, Texas, in the early 1960s.

From 1960, Bauduc lived in Bellaire, Texas in semi-retirement, but visited New Orleans in 1983 where he was greeted effusively. He also appeared occasionally at Crosby Orchestra reunions and worked with Pud Brown on several recordings His best known student from his teaching days in Bellaire, Texas is Charlie Harrington.

In 1985 he showed that he had lost none of his enthusiasm and little of his skill in a reunion of the Crosby band at the Mid-America Jazz Festival in St Louis. Bauduc's snappy, clean exuberant drumming gave any band in which he worked an exciting, happy sound.

Known as the primary exponent of Dixieland drums, Bauduc could also swing with the best of them and was a favorite of Krupa, Rich and Bellson, in addition to the fore mentioned Chick Webb. Most of his most famous works, including his one big hit, “Big Noise From Winnetka” (where he played his sticks on the bass strings of Bob Haggart) were performed during his time with Bob Crosby and The Bobcats, from 1935 to 1942.

This was an interesting group, which could best be described as “dixie with swing overtones” or vice versa. Good examples of this band can be heard on “Big Band Dixieland” (1938: Jasmine label), “Bob Crosby and His Orchestra and The Bobcats” (ca. 1941: Nimbus label), “South Rampart Street Parade” (1937: Decca label), “The Big Noise From Winnetka” (1938: Decca label), with Pete Fountain on “New Orleans To L.A.” (1954-1956: Southland label).
Show less 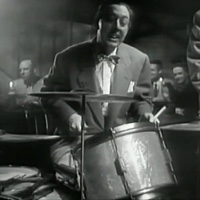 All About Jazz musician pages are maintained by musicians, publicists and trusted members like you. Interested? Tell us why you would like to improve the Ray Bauduc musician page.