Petros Dragoumis has been an active member of the international music scene for the last 35 years, while having a career rich in collaborations, recordings, television appearances, teaching, writing books, and anything related to musical expression. Born in Edessa, Greece, his love for music was expressed from a very young age in a natural and spontaneous way, starting with the drums, moving on to the guitar, and finally the bass. His life followed its own path, and since he couldn’t resist his destiny, he created an enviable career both in numbers and quality. Even though he started as self-taught due to living in a small town and disconnected from substantial information sources, and even though he had followed from his early steps a strong career path, his love and endless search for learning and progress made him an eternal student and researcher of the art and science of music.

PROFESSIONAL ACTIVITIES Cooperation with more than 200 artists in music halls, theaters, etc. for more than 4.000 live concerts. 10 world tours in North America, Canada, Australia, South Africa, Europe, and Asia. Member of the State Philharmonic of Thessaloniki. Band member of the Semina’s Digeni tv show “Koita ti ekanes” in Alpha TV channel for 2 years. Band Member of David Nahmia’s TV show “Ihnilates” in ERT national TV channel. Band Member of TV show ‘’Na I efkairia’’of Mega TV channel. Played in music TV shows and voice competitions ''Dream Show'' in Alpha, and ''Fame Story'' of Ant1 TV channel. Recorded , composed, arranged and produced over 200 CD’s (1,000 songs), TV shows, DVD’s, etc. Director of Small Jazz Festival in Athens Producer of the 1st Bass Day of Athens Music Director and Production Manager of Yianni Papastefanou Orchestra New York City Founder and leader of the Jazz Fusion group “Minimal” with which he recorded his first personal CD containing strictly his own compositions. In general, music was always the absolute means of creativity and expression throughout every moment of his life. Petros is a member of the Panhellenic Music Association as a musician, member of AEPI as a composer and lyricist, and the Apollon Association as a studio and TV session player.

The private lessons that he has taught include over 70 students many of whom have succeeded in the Greek music scene and abroad. Over the last 10 years and while feeling that some areas had been completed and other new ones were opening up ahead, he concentrated with much love, patience, persistence, and research in the writing of educational music books. His goal was to present his own views on music education since he discovered areas that lacked certain kinds of educational material. He tried to cover those areas in the most comprehensive way possible while at the same time sharing all his lifetime personal knowledge and experience.

His books include: Theoretical Treatise of Jazz and Contemporary Music http://www.cambiabooks.gr/index.php?dispatch=products.view&product_id=238 May 2018 A complete Jazz Theory book (Published, ISBN: 978-618-5178-07-9),

b. A comprehensive, clever, simple, and geometrical learning system which covers technical aspects of the bass as well as other related instruments such as guitar, and other string instruments. This system includes approximately 20 books, The 6 String Bass Guitar ISBN 978-1949880007 https://www.amazon.com/dp/1949880001 November 2018

There are also future plans for additional educational material.

Finally, over the last few years, Petros has been living in the United States and has had the opportunity to get to know the culture of Greeks of diaspora while at the same time incorporating Afro-American elements along with his own rich traditional background. With all of the above, he has been able to combine the past with the present, the east with the west, and the present with the future, giving himself the opportunity of continuous creativity and development. - 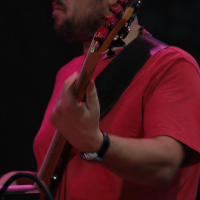 All About Jazz musician pages are maintained by musicians, publicists and trusted members like you. Interested? Tell us why you would like to improve the Petros Dragoumis musician page.