Peter Nero was trained as a classical musician, and became interested in jazz at the age of 19 after hearing the legendary Art Tatum. In the late 50s, he spent four years playing jazz clubs such as the Village Gate, Village Vanguard, the Blue Angel, and the Tropicana lounge in Las Vegas, before being discovered by RCA Records in 1960. They were looking for a ‘pop’ pianist, and auditioned more than 100 before choosing Nero. During the next eight years, he recorded some 24 albums, including the Grammy-winning “The Colorful Peter Nero,” in 1963. Two years previously, in 1961, Nero had won the Grammy for Best New Artist.

Peter Nero is unrivaled as a pianist and Pops conductor. His blending of classical, swing, Broadway, blues and jazz - all performed with vibrant virtuosity, amazing authenticity and an inviting sense of humor, have won him a loyal and enthusiastic audience. "The best aspect of Nero's art could well be his crazy creativity. He has the gift of seeing a song as no one has seen it before," exclaimed Mary Kunz, music critic for The Buffalo News. The Washington Post has dubbed Peter "the epitome of the Pops Conductor/Performer."

The Maestro's recent guest performances include return engagements with the National Symphony Orchestra at the John F. Kennedy Center for the Performing Arts, the Buffalo and Dayton Philharmonics, the Florida Philharmonic, and the Pacific, St. Louis, Ottawa, Detroit and Virginia Symphony Orchestras. Peter also continues to tour throughout the year in solo recitals. As a Steinway artist for close to 50 years, Peter returned to New York's Carnegie Hall in the spring of 2003 to perform at the 150th Anniversary of Steinway Gala with many noted pianists, including Dr. Billy Taylor, Herbie Hancock and Michel Legrand.

The Brooklyn-born musician started his formal music training at the age of 7. By the time he was 14, he was accepted to New York City's prestigious High School of Music and Art and won a scholarship to the Juilliard School of Music. Constance Keene, his teacher and mentor, once wrote in an issue of Keyboard Classics, "Vladimir Horowitz was Peter's greatest fan!"

Peter recorded his first album in 1961 and won a Grammy that year for "Best New Artist." Since then, he has received another Grammy Award, garnered 10 additional nominations and released 67 albums. 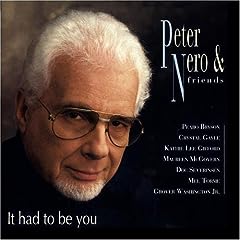 It Had To Be You

All About Jazz musician pages are maintained by musicians, publicists and trusted members like you. Interested? Tell us why you would like to improve the Peter Nero musician page.