Pianist, composer and arranger, graduated in Classical Piano and in Jazz with also a Degree in Economy, he is Professor of Jazz Piano at ‘Luca Marenzio’ Music Conservatory in Brescia.

Pasquale Stafano is a teacher in piano jazz and classical, composition and arrangement in several Public and Private High Schools and Conservatory since 1998. His students won several prizes in national and international piano competitions.
He held workshops and masterclasses at University in Italy, South Korea, Switzerland,Taiwan, Hong Kong, China and Thailand.
In 2011 and 2012 he was invited for a live performance for six times as musical guest in the TV show “I fatti vostri” on RAI 2, one of main Italian TV channels.
He was invited for interview and live performances at “Suoni d’estate” (“Suoni d’estate”) at RADIO RAI 1 and “Fahrenheit” programs  and Radio RAI 3, on MBC Radio Seoul, one of the most famous radio program in Korea, he had a live performance and interview with Mr Bae Chul Soo. He had live perfomance and interviews also in MBC Radio Daejeon, MBC Radio Busan and EBS TV in South Korea.

He is the founder and Artistic Director of “Stornarella International Music Festival” in Stornarella a city in South of Italy since 2010. 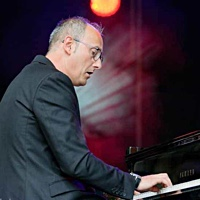 All About Jazz musician pages are maintained by musicians, publicists and trusted members like you. Interested? Tell us why you would like to improve the Pasquale Stefano musician page.