Mitch Watkins career started at the age of 13, gigging with a surf band in McAllen, Texas. After beginning a choral conducting degree, followed by a stint on tour with a rock band, Watkins moved to Austin, studying composition for four years at the University of Texas and immersing himself in jazz guitar. Inspired by the blend of rock and jazz pioneered by Miles Davis, John McLaughlin, Chick Corea, and Weather report, Watkins and his schoolmates formed Passenger, a cult favorite Austin band. "Through a strange series of events," says Watkins, Passenger became Leonard Cohen's backing band in 1979, touring with Cohen twice in Europe and Australia.

Mitch Watkins has five releases under his own name: "Underneath it All" (Enja-1989), "Curves" (Enja-1990), "Strings with Wings" (Enja-1992), "Humhead" (Dos-1995) and "In the Time of Long Shadows" (Viewpoint -2006), as well as a CD co-produced with Austin songwriter Bob Schneider, "Underneath the Onion Trees" (Shockorama-2000). His discography is extensive, including appearances on Leonard Cohen's "Recent Songs," Barbara Dennerlein's "Straight Ahead," "Hot Stuff," "That's Me," "Take Off!," "Junkanoo," and "Outhipped," Joe Ely's "Hi-Res," "Lord of the Highway," and "Dig all Night," "Abra Moore's "Sing" and "Strangest Places," Paul Glasse's "Paul Glasse," "One More Night" and "The Road to Home" Bob Schneider's "Under the Onion Trees" and "The Galaxy Kings" Jerry Jeff Walker's "Jerry Jeff Jazz," and John Fremgen's "Meanwhile" and "If not Now." He has appeared on The Tonight Show, Late Night with David Letterman, and Austin City Limits.

When Mitch Watkins is not traveling as lead guitarist for Leonard Cohen, Lyle Lovett or Jerry Jeff Walker, he is busy in Austin in his own recording studio, working with Austin artists including mandolinist Paul Glasse and bassist John Fremgen, and teaching at the University of Texas.

"A versatile player who crosses over into several different camps." —Guitar Player

"Mitch Watkins is developing a reputation as a brilliant guitarist who is a musician first, in the truest sense of the word. Versatile to great lengths, Watkins shows no limits to his talents or his very keen imagination, and he fears no medium." —Jesse Nash, Jazz Times 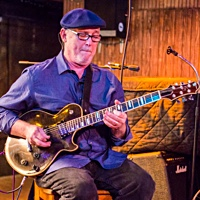 All About Jazz musician pages are maintained by musicians, publicists and trusted members like you. Interested? Tell us why you would like to improve the Mitch Watkins musician page.