Milana is a multi-award winning pianist, composer and singer-songwriter, who has been a performing and recording artist since her childhood. A strong lyricist and composer in her own right, Milana’s style is reminiscent of Tori Amos, Sarah McLachlan, Michael Nyman, Keith Jarret and Chick Corea. Milana enjoys playing by ear, improvising and using whatever inspires her to create her own style of playing. She is known as an adept improviser, catching melodies on the fly and expanding them into her own creations.

Milana was born in Ukraine, lived in Israel for many years and moved to Canada in 2008. Having lived in different countries has enriched her musical experiences and storytelling. Her songs touch on issues of belonging, identity, the inner child, war and peace, and life and death. Soulful singing and complex piano melodies are Milana’s signature, but she embraces a variety of styles – everything from folk, blues, opera and Middle Eastern, to her soft spots for rock and jazz.

Milana has released thirteen full-length albums (solo piano, original songs and New Age) and published three books with original scores for solo piano. Since 2012, in addition to performing live and releasing original albums, she has also taken piano and vocal performance in a commercial direction by doing session recordings, arranging, composing for films and online music libraries in her own studio located in Ottawa’s suburb

Milana Zilnik Ottawa piano Jazz piano Singer Jazz Singer TV / Film Session Musician Recording studio Composer
”The hustle and bustle of every-day life can be brought to a gradual stroll, a breath of fresh air, with just the right melody and pacing. Cars slow down, people stop talking, and the mind lulls into a dream. Milana’s chamber piano work and voice combine to create just the right antidote for the drag of the day’s agony and stress.” (c) SoundCloud Music Reviews 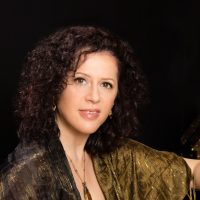 All About Jazz musician pages are maintained by musicians, publicists and trusted members like you. Interested? Tell us why you would like to improve the Milana Zilnik musician page.