Mike is also an active educator and clinician working internationally on different projects. In Illinois, he has students of steelpan, drumset and percussion. He has taught drumset classes at the Triple Threat Mentoring Organization and currently directs Oswego High School's Marching Percussion with Aaron Spevak. As a part of Paa Kow Band, Mike has been able to perform at Chicago's Old Town School of Folk Music on two occassions, taking the opportunity to share living African music with a Chicago crowd! He has taken part in a variety of clinics ranging from the history of the steelpan to its future, other clinic topics have included African and Afro- Cuban drumming traditions.

Enabling the creation of new music for steelpan is a huge part of his artistic drive. In 2011 he completed his first collaboration with composer Kyle Krause. The result was a 3 piece suite of short works for steelpan solo and duet. In fall of 2013, Mike gave a a recital of almost entirely new music for steelpan. It featured works by Todd Jelinek, Kyle Krause and Kevin Bobo (a piece commissioned and premiered a few months earlier by Liam Teague). In 2016, Mike was able to premier a duet for Double Second Steelpan and Clarinet by Krause as well as exhibit some of his previously commissioned works as a guest in a composition lecture at the Peabody Conservatory. Mike will presented a recital programmed entirely of commissioned pieces in 2018 and will be premiered Aaron Gage's "On the Mercurial Tides" for wind ensemble with steelpan soloist in 2019.

In his many performances over the years, Mike has shared the stage with artists like Liam Teague, Dave Katz, Mark Nelson, Ricky Sweum, Brad Goode, Paa Kow, Ethan Bell and many others. Mike regularly performs around the Chicago and northern Illinois area. In the studio, he has recorded on drumset, steelpan and other percussion instruments. He has spent time in the studio and on stage with the Furgeson/Moritz Hammered Dulcimer Duo, Paa Kow Band, The Ethan Bell Band and others. Mike traveled to Los Angeles to record on the 2017 and 2018 Pan Rocks recording projects that featured iconic rhythm sections with musicans like Stephen Perkins, Mike Portnoy, Billy Sheehan, Pete Thorn, Tracii Guns, and 30 steelpan players lead by Tracy Thornton.

Mike has been a featured soloist with the NIU World Steelband, has performed at PASIC in 2011, 2015 and 2017, as well as traveled to Trinidad for Panorama. Mike and a small steelband of pan majors from NIU performed at the 2012 Hyde Park Jazz Festival and the Matthew Tembo World Music Celebration. In recent years, he has performed at festivals like Denver's City Park Jazz Festival, the Summer Solstice Indie Music Festival, Santa Fe Bandstand, the Montreal International Steelpan Festival (Canada), the Patagonia International Percussion Festival (Argentina) and many others. 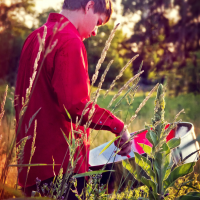 All About Jazz musician pages are maintained by musicians, publicists and trusted members like you. Interested? Tell us why you would like to improve the Mike Schwebke musician page.