Born on Japan's main island, Michika grew up in the city of Mie and began to play the piano at the age of three. Within the next three years Michika was composing and playing her own music. After studying classical composition at the Aichi Prefectual University of Fine Arts and Music, Michika studied with renowned Japanese pianist Colgen Suzuki and began working professionally at a wide variety of jazz clubs in and around Tokyo.

In 2000,Michika moved to the United States and began studying with Ron Carter and Geri Allen at City College of New York along with private lessons under the tutelage of Steve Kuhn. Michika got her Masters Degree at CCNY in 2003.

Since then, Michika has been playing at many of Manhattan's most prestigious jazz clubs such as Lenox Lounge and Beekman Tower Hotel. In 2004, 2005, 2010, 2013 and 2017 Michika was proud to lead a trio at New York's jazz mecca,The Blue Note. In 2004 Michika recorded her first album, “Infinite Thoughts”, joined by David Finck (bass), Billy Drummond (drums) and produced by Steve Kuhn.

In 2016 Michika released her second album,” Quality Time” from Summit Records(USA), played with Aidan O'Donnell (bass) and Billy Drummond (drums) and produced by Steve Kuhn. It marked #33 on Jazzweek chart (the radio chart of USA) and stayed within #50 few weeks.

In 2018 Michika released her third album, “Piano Images” (solo piano) from Summit Records. Steve Kuhn produced this album and joined one of his representative songs “Oceans In The Sky” as a four-hand performance.

Today Michika enjoys a variety of work in the U.S. along with annual trips to her homeland, touring Japan as a leader of trios and quartets for the last fifteen years.

Michika is an accompanist for Carol Fredette's Jazz Vocal Workshop and is currently performing at various venues in Manhattan such as Arturo's, Antique Garage and The Kitano (Jazz at Kitano) etc. Show less 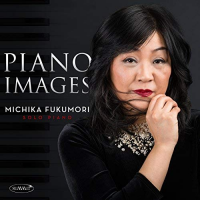 All About Jazz musician pages are maintained by musicians, publicists and trusted members like you. Interested? Tell us why you would like to improve the Michika Fukumori musician page.