Michael Parkinson is a music educator, conductor/performer and clinician in Metro Kansas City.. He is a KHS America Education Artist as well as an XO Professional Brass Artist.  Mike is the director of the TRINITY JAZZ ENSEMBLE, an ecumenical group in residence at Rolling Hills Presbyterian Church in Overland Park, Kansas. He is also a performer/educator for the Kansas Touring Arts program and a clinician for Nottelmann Music, Inc. Mike most recently served as Director of the School of Music at Middle Tennessee State University where he founded the IMPROV Ensemble and taught courses in jazz studies. He performed with the MTSU Jazztet on tours of China in 2017 and 2018, and was named Guest Professor of Performing Arts at the Wuhan Conservatory of Music. He previously served as Director of the Ohio University School of Music and as Music Department Chair at Webster University in St. Louis. He taught courses in jazz studies, contemporary music, and entrepreneurship at Ohio and founded the New Music Ensemble and the Mini-Big Band at Webster. In his administrative positions, he has worked extensively in development and alumni relations, marketing and recruiting, facilities improvements, international relations/partnerships, curricular design, faculty assessment, student wellness, and entrepreneurship. He also held faculty appointments at Case Western Reserve University, Furman University, and the University of Missouri-Kansas City as Director of Jazz Studies. A native of Cleveland, Tennessee, Mike received the DMA in Wind Conducting from the University of Cincinnati, the MM in Trumpet Performance from Kent State University, and the BM in Music Education from the University of North Texas. He studied trumpet with Frank Brown, John Haynie, Harry Herforth, and Marie Speziale; and conducting with Kelly Hale, Donald Hunsberger, David Kuehn, and Terry Milligan. His primary influences are Bob Brookmeyer, Miles Davis, Charles Mingus, Bill Scarlett, Kenny Werner, and Kenny Wheeler. Mike has served as an adjudicator, clinician, conductor or performer at events such as MUSICFEST USA and the Greater Southwest Music Festival, and at schools and festivals across the United States. He has directed ensembles for conferences of the College Band Directors National Association, International Association for Jazz Education, International Electronic Music Plus Festival, National Association for Music Education, and the Arkansas, Iowa, Kansas, Missouri, Ohio and South Carolina Music Educators Associations state conferences. He is the author of “BASIE, BEBOP, BALLADS & BLUES,” a jazz ensemble repertoire guide, and “BEYOND THE BLUES,” a guide to jazz ensemble score-part editing and rehearsal techniques.

He also presents clinics on improvisation, entrepreneurship, and musicianship. Mike has performed with American artists including Bob Brookmeyer, Bill Dobbins, Gary Foster, Bobby Watson, Gary Wittner and Phil Woods, and Polish artists such as Marek Balata, Joachim Mencel, Janusz Muniak, Jacek Niedziela, Wlodek Pawlik, and Domink Wania. His experience includes shows such as George Burns, Glen Campbell, Rosemary Clooney, the Four Aces, and the Manhattan Transfer. He has recorded with harpist Michelle Himmell, the Spirit of Kansas City Orchestra, the St. Thomas Quartet, Kirby Shaw, Jazz Spoken Here, and the Webster jazz faculty. An avid supporter of “new music,” he founded the Webster University New Music Ensemble and led performances by student ensembles from UMKC and Ohio University for Society of Composers national conferences. He has worked with composers including Robert Cooper, Halim El Dabh, Donald Erb, Gay Holmes Spears, James Mobberley, Mark Phillips, Kim Portnoy, and Paul West Osterfield. For ten years, Mike served as Artistic Director of the International Summer Jazz Academy in Poland, bringing American, Austrian and Polish artists together to work with talented students from across Europe and the US. In recognition of his service, he was named Amicus Poloniae by the Republic of Poland. He returned to Krakow for the 25th anniversary ISJA in 202 1 and again in 2022 as guest Artistic Director. For his service to the state of Missouri, he received the Jess Cole Award from the Missouri Association of Jazz Educators. He is a Sigma Alpha Iota Friend of the Art and a member of the American Federation of Musicians, the Jazz Education Network, Phi Mu Alpha Sinfonia, Pi Kappa Lambda, Rotary International, the International Relations Council, and the United Methodist Church, and an honorary member of Kappa Kappa Psi and Tau Beta Sigma. His interests include Formula 1 racing, reading, and Polish studies. He is married to Charlene Hanson, a native of North Dakota, former director of the Tennessee Philharmonic Orchestra Chorus and  music director at churches in Kansas, Missouri, Ohio, North Dakota and Tennessee. The Parkinson family resides in Overland Park, Kansas.

PROFESSIONAL ENDORSEMENTS: Jamey Aebersold, American Jazz Master and internationally renowned jazz educator • “Mike Parkinson and I go way back. Mike has been a true jazzer and educator of our American music for many years. He’s spent his life immersed in it. He knows the SOUND and the players and loves showing others how to actually play jazz.” Paul DeMarinis, Director of Jazz Studies, Webster University • “Mike Parkinson is many things—a hard bop messenger, an evolving artist of vast experience and insatiable curiosity, an educator of great substance and integrity, a global citizen, and a seasoned traveler who has had the wisdom to follow his heart where it might lead him

PROFESSIONAL ENDORSEMENTS: Jamey Aebersold, American Jazz Master and internationally renowned jazz educator • “Mike Parkinson and I go way back. Mike has been a true jazzer and educator of our American music for many years. He’s spent his life immersed in it. He knows the SOUND and the players and loves showing others how to actually play jazz.” Paul DeMarinis, Director of Jazz Studies, Webster University • “Mike Parkinson is many things—a hard bop messenger, an evolving artist of vast experience and insatiable curiosity, an educator of great substance and integrity, a global citizen, and a seasoned traveler who has had the wisdom to follow his heart where it might lead him. His long, vital career is a testament to the transformative power of the arts in a life well-lived.” Gary Foster, Los Angeles jazz and studio woodwind artist. • “In Spring 1984 the North American Saxophone Alliance had its conference at the University of Missouri at Kansas City. As a guest performer with the UMKC wind ensemble and jazz ensemble, I first encountered Mike Parkinson, who conducted both groups! From 1984-1997, on four yearly visits to UMKC, working with Mike was the most satisfying teaching experience of my life. Mike Parkinson’s accomplishments as an educator, trumpet player and colleague are remarkable in my experience.” John Hahn, Director of Bands, Chaminade College Preparatory School, St. Louis, Missouri • “Mike Parkinson has a unique and amazing ability to combine musicianship, knowledge, communication and passion for people. Every conversation, lesson, clinic or rehearsal reflects Mike’s complete dedication to his craft. He is a master of both the art and science of teaching and playing music.” Dr. Charles Menghini, President Emeritus, VanderCook College of Music, Co-Author, Essential Elements Band Method, Educational Member, Music Achievement Council, NAMM • “Mike Parkinson is one of those rare teachers who will elevate your group to the next level in minutes. His ability to listen, analyze, diagnose and prescribe is amazing. Your students will love working with him and you will too!” Jerry Tolson, Professor, Jazz Studies and Music Education, Chair, Department of Academic and Professional Studies, School of Music, University of Louisville • “Mike Parkinson is a consummate performer and improviser with innovative ideas and intriguing creativity, and he is a consummate teacher who works well with students of all ages and ability levels. In addition, he has long advocated the importance of developing outstanding musical and entrepreneurial skills for success.” Gary Wittner, internationally known jazz guitarist and authority on the music of Thelonious Monk, jazz faculty at the University of Southern Maine. • “Mike Parkinson is a consummate professional musician and music educator. As a trumpeter, his deep knowledge of the jazz tradition is clearly evident in his playing. Always humble and selfless, for Mike the music is always the #1 priority. As an educator, he is disciplined and caring - always striving to bring the best to, and get the best from, his students.” 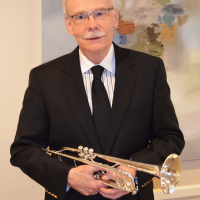 All About Jazz musician pages are maintained by musicians, publicists and trusted members like you. Interested? Tell us why you would like to improve the Michael Parkinson musician page.