Matt Belzer, born in Camden, NJ is the younger of two sons; raised in Runnemede, NJ--exit three on the Turnpike. The combination of good public and private teachers, a musical brother and proximity to Philadelphia, fostered in Belzer a passion for art and music. Belzer began playing saxophone at the age of nine and added clarinet two years later. During this time, he developed a wide-ranging interest in various musical styles, which has helped to define his creative activities to the present day.

Thanks to Belzer’s teachers and a supportive family, Belzer was accepted to the prestigious Eastman School of Music where he studied saxophone, clarinet, flute and composition. Belzer’s skills were refined while studying with Ramon Ricker, Richard Sherman, Bill Dobbins, Fred Sturm, Michael Caine, and Ralph Alessi. While receiving his master’s degree Belzer toured Germany and Japan as a member of the school ensembles. Belzer’s summers were spent in South Jersey where he would venture weekly into Philadelphia to attend jam sessions. During this time, Downbeat Magazine and the Jazz Composers Alliance honored Belzer’s performances and compositions. Upon graduation, Belzer moved to Cincinnati to be with flutist and future wife Mariko. During this time, Belezer recorded and performed with bassist and former Eastman classmate Drew Waters cementing a long musical partnership. Belzer also joined the critically acclaimed rock group Big Soap where he added Theremin (An electronic instrument played by moving the hands near its two antennas) to his list of instruments. As a member of Big Soap, Belzer toured the US and gained valuable musical experience from the “do-it-yourself” world of indie rock. In addition, while in Cincinnati, he struck up a friendship with flutist Dr. Bradley Garner who commissioned Belzer to compose a work for flute and piano, which Dr. Garner premiered at the National Flute Association convention in Phoenix, AZ. The work, B4B, was eventually published on Advance Music.

From that time to the present, with Mariko’s help, the two of them have given numerous performances throughout Japan. The concerts featured Belzer and Mariko in a variety of musical settings; including music with traditional Japanese taiko drummers composed by Belzer. Wanting to return to the east coast, Belzer moved to Baltimore, Maryland where he and Mariko have lived ever since. Belzer has emerged as a high demand freelance musician in the Baltimore/D.C. area. Belzer is a member of the early jazz groups the Peabody Ragtime Ensemble and the Baltimore Jazz Orchestra, often leading the groups himself. One major highlight was conducting Duke Ellington’s Best of the Sacred Concerts for jazz ensemble, choir, soloist, narrator, dancers and tap dancer.

Belzer is just as likely to be playing old-school funk in D.C., as he is to be playing in the clarinet or flute chair of a local orchestra or up-to-the-minute jazz on the street. To Belzer, it is all music and part of a lifelong process of learning, growing and playing.

In recent years, he has formed another important musical partnership with drummer Scott Tiemann. They perform together regularly as a drum and saxophone duo called Tiemann-Belzer. The duo concentrates on exploring the controlled freedom that is especially available to that type of instrumentation. The duo’s debut CD Crypto was named one of the top 20 local Baltimore releases of 2004. This duo forms half of Matt Belzer’s ensemble for Connections, which also includes longtime collaborator Drew Waters and the celebrated D.C. pianist and soundsmith Jon Ozment.

During the daylight hours, Belzer has attached himself to several institutions. Belzer is the Director of Homewood Jazz Ensembles at the Johns Hopkins University where he directs two large groups in performances including the music of Charles Mingus, Gil Evans, Sun Ra and his own original compositions and arrangements. Belzer is also the Jazz Department Chair of the Peabody Preparatory and teaches various music and jazz courses at the University of Maryland - Baltimore County. In addition to Advance Music, he is published with UNC Jazz Press and his own company Matobelu Music.

Latest Release: Connections debuts seven original compositions from the heart and mind of Matt Belzer. It begins with “Deep Focus.” Its title has several meanings: concentration, cyclical harmony, elliptical form, and foreground versus background. A jazz-rock seven groove is the heart of the piece with sections appearing and disappearing along the way. Belzer is featured on soprano saxophone, alto flute and clarinet throughout the composition, with solos by Belzer, Ozment and Tiemann. Especially interesting is Tiemann’s innovative “bouncing ball” approach to time on this track and throughout the album. Fittingly, “The Ember Waltz” is the second track. The title is an anagram of M-A-T-T-H-E-W-B-E-L-Z-E-R, the numbers 2 and 222 figure prominently in the piece, both of which are lucky (good and bad) numbers for Belzer. The piece folds in on itself in unusual ways, creating the musical effect of an Escher print. It features solos by Belzer on soprano and Ozment on piano. “Misfit the Second” is third, of course. It is about second-borns and misfits • especially musical misfits. Inspired by the rhythms of Morse code, it has an extended form with 23-beat phrases, driving 3/4 time, and freedom. Belzer is on alto saxophone, with Ozment on piano, and electronics. Waters and Tiemann maintain incredible intensity throughout the piece. The final sounds are engineer Les Lentz’s contribution, connecting into “No Blues on Mars (It’s All Red).” This time, Belzer is on the alto flute with an imaginary clarinet trio behind him. The composition is a bittersweet tone poem about the fourth planet in metaphorical terms. Unusual phrase lengths and the occasional dissonance, give this otherwise gentle tune a disturbing and alien quality. Next is, “The Station,” an unabashedly pretty tune, is a deeply personal song about the journey of life and trains, which features Belzer on clarinet and Waters on his 6-string electric bass • his instrument of choice throughout the album. “The Station” begins as a duo between Belzer (clarinet) and Waters (six-string bass). Along the track Ozment and Tiemann join in briefly to support the solos before returning to the duo to finish the journey. “Truism,” has to do with sincerity. The group, minus Tiemann, stretches out on this piece with an incredible amount of mental telepathy exhibited between them; in fact, this was the first take. The great D.C. musicians with whom Belzer has had the pleasure of working with and who taught him where the pocket really is, musically inspired the piece “TINJITU” which was written on bass after an unfortunate personal turn-of-events. The group performs it honestly and without irony. It grooves. 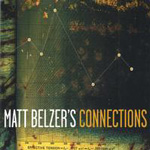 All About Jazz musician pages are maintained by musicians, publicists and trusted members like you. Interested? Tell us why you would like to improve the Matt Belzer musician page.