He has been called “one of Finland's best kept secrets”, the highly acclaimed but criminally under-recorded guitarist and composer Mathias Sandberg is one of the hardest working jazz musicians in the country.

For the past 15 years, he has been touring with some of the greatest jazz artists on the Finnish and Swedish jazz scene, including Georg Riedel, Pierre Swärd, Peter Asplund, Nick Mancini, Jukka Eskola, Teppo Mäkynen, Manuel Dunkel and many others.

Born in Jakobstad on the west coast of Finland, Sandberg started playing guitar at the age of eleven and landed a teaching job at the main music school in the region just five years later. After graduating from the conservatory in his hometown and a short stint at the Berklee College of Music, he moved to New York City to attend the prestigious Manhattan School of Music.

After returning back to Finland, he formed the now almost legendary soul jazz quartet Dr. Sandberg's Soul Clinic. Though the band was short-lived, “The Doctor”, as he is still referred to, soon formed the first incarnation of the Mathias Sandberg Trio (aka M Sandberg Trio), which has since become a mainstay on the local jazz scene.

Sandberg also formed the Mariah Hortans / M Sandberg Duo, with whom he has toured in the USA and recorded two albums. To this day the duo still tours more extensively than any other jazz group in Finland. He is also the musical director, guitarist and arranger for the jazz vocal group Ginger Sisters. 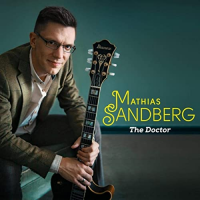 All About Jazz musician pages are maintained by musicians, publicists and trusted members like you. Interested? Tell us why you would like to improve the Mathias Sandberg musician page.