Dreams are elusive creatures. Snag one, and life can change suddenly: A yellow brick road appears. A good witch waves a wand. An inexplicable spirit conjures New York, where one suddenly bathes in the light of triumph, radiating beauty and warmth and love and sunshine. Meet Masumi Ormandy, a person of uncommon determination, an artist whose first jazz recording proves that capturing a dream can be as simple as singing a song.

“Autumn Leaves” features one of the hottest trumpet players in New York, Mr. Freddie Hendrix, inspired by the original recording by Miles Davis. “I'll Be Seeing You,” is a warm Bossa nova, floating like a sweet Brazilian breeze featuring Paul Meyers on guitar. “ On the Sunny Side of the Street,” swings like mad with jazz great, Mr. Houston Person on tenor sax and inspired by Masumi's love of Louis Armstrong. The creative arrangements were created by master pianist, educator, Lee Tomboulian and supported by the top New York rhythm section of ; Dean Johnson bass and Tim Horner, drums. Masumi Ormandy receives a top shelf send off for her debut recording, worthy of the finest soloists on the New York scene today. Ormandy's vocals deliver conviction and heart, as she interprets the classic American Songbook.

Masumi had always known about music, had been around it since childhood, but sublimated her artistic pursuits for 43 years, while teaching English in Japan, her homeland. Life was full - she ran a school, trained teachers, immersed herself in the richness of American culture. She accomplished much. Yet, at age 77, after decades of providing selfless assistance to others, nurturing communication skills in students young and old, Masumi stepped into the sun, blinded by the conviction that there is no better moment than now: This was the time to fulfill a dream - kindle the flames of purpose and desire, sing jazz. Learning the language of a vocal music was an enormous decision and challenge. What’ s more, Masumi wanted to interpret the Great American Songbook, a labor transcending her cultural comfort zone. The result is “Sunshine In Manhattan,” an inspiring record with melancholic echoes of self- determination, focus and courage. It is a revelation, as much for Masumi’ s story as for the sound of her soul. She is living her dream. The opening track tells all. Masumi’ s misty read of “As Time Goes By,”an evergreen originally owned by Dooley Wilson in the film Casablanca, is an advisory and a declaration - she has livedthat lyric. She is a child of the second World War who fell in love with an American. She absorbed life’ s lessons from many sides, and when she offers the line, The fundamental things apply..., there is no second-guessing her meaning. She sings from experience, earning the right to add Jazz Vocalist to her impressive list of credentials. “Sunshine...” is her baptismal moment. And, who better to administer this rite than producer Roseanna Vitro? Roseanna, a Grammy-nominated vocalist and educator whose influence can be heard among musicians across generations, knew that Masumi was a special person. This record was a lifeproject, she understood, with unique contours and tracings. As such, different rules and procedures applied. What were they hoping to achieve, she asked? What is this record trying to say? Ultimately, they embarked on an act of discovery, with findings that surprised them both. Their roles converged, revelations blurring the line between student and teacher. In which direction did these enlightenments travel? Who was mentoring whom? This melding of mentor and protege proved an unexpected delight. So the story of “Sunshine...” is almost a fable. Two people came together for the purpose of making a record, then emerged with more than they imagined - music that breathes with conviction, and a deep and abiding friendship. Their partnership brought life. Thus, we are surrounded by the soft-edge glow of a dream. “Sunshine In Manhattan” casts a sweet, illuminating light. The arc of Masumi’ s life resembles a rainbow. That legendary pot of gold, seekers hope to uncover? This record. Riches for all. ~Jeff Levenson July 2016

'MASUMI ORMANDY: “SUNSHINE IN MANHATTAN” Liner notes by Thomas Cunniffe Masumi Ormandy is known to her friends as “Sunshine,” and for her debut album, she infuses a program of well-known standards with the unflagging optimism that has kept her going throughout her life. Like one of her singing idols, Ella Fitzgerald, Masumi displays a crystal-clear tone and unerring pitch. And even though she is 77 years old, she possesses vocal control that few of her contemporaries can match. Masumi’s father was a professional musician, conducting and playing harmonica on Japan’s NHK radio network. As a youngster, Masumi had considerable exposure to American culture—she began speaking English at the age of 10—but her early experiences in performing music amounted to childhood piano lessons, and a couple of years of conservatory training in Tokyo and San Francisco. She cut her studies short to marry her husband Ray, an American who had relocated to teach at a university in Tokyo. Masumi and Ray co-founded the Pacific Language School, where Japanese students ranging from kindergarteners to adults learn the English language. Forty-three years after the school’s founding, Masumi still plays a central role in its operation as she trains teachers, records instructional CDs and oversees a North American home-stay study program. As if that weren’t enough to keep her busy, she launched her professional singing career eleven years ago. Her first period of intensive study took place in Bergamo, and at that time, she performed a mix of pop and art songs. She loved listening to jazz, but didn’t think she could sing it until she met Eriko Miyake-Mori, a former student of jazz vocalist and educator Roseanna Vitro. In the summer of 2015, Masumi traveled to New York to study with Roseanna. After three months of diligent training, Roseanna suggested that Masumi record this album to document her development. Masumi agreed, and Roseanna assembled the extraordinary team that accompanies Masumi’s performances. Three of the musicians—violinist Sara Caswell, bassist Dean Johnson and drummer Tim Horner—are all members of Vitro’s exquisite working quintet, and on this recording they bring the same musical chemistry that enriched Vitro’s acclaimed recordings of songs by Randy Newman and Clare Fischer. Pianist Lee Tomboulian was the album’s musical director, creating all of the arrangements in collaboration with Roseanna. Guitarist Paul Meyers, a longtime veteran of the New York scene and former sideman for Jon Hendricks and Andy Bey, offers a sensitive backdrop on the verse of “It Had to Be You.” The brilliant Jersey trumpeter Freddie Hendrix channels several jazz masters on the album’s title track, and the tenor saxophone legend Houston Person provides a lush cushion on Erroll Garner’s immortal “Misty.” The music was recorded by Paul Wickliffe, who is both one of the finest sound engineers working today and Roseanna’s husband. Masumi told me that she was quite moved by the work of everyone on the team, noting that each went far beyond their usual roles to provide a strong network of artistic support. The music on this album is highly accessible, and the songs are all familiar to jazz fans. However, one track deserves special mention. “My Way” was a signature song for both its composer, Paul Anka, and his best-known interpreter, Frank Sinatra. However, Masumi feels that the song also relates to her own life experiences. World War II was still raging when she was a young girl, and the memories of hiding in bunkers still haunt her today. As a couple of mixed nationalities, she and Ray faced racial discrimination in the early years of their marriage. She has traveled the world in the last few decades, and believes that music and the English language can help unify the people of different countries. Masumi sings “My Way” with great passion, and her strong statement is supported by Sara Caswell’s lyrical violin solo and overdubbed string backgrounds. Masumi Ormandy may have found her voice late in life, but her conviction and maturity makes her music very compelling. THOMAS CUNNIFFE is a free-lance writer who resides in Denver, Colorado. An award-winning author, he is the founder, publisher, principal writer and editor of www.jazzhistoryonline.com. In addition to writing about music, he is an experienced vocalist in both the jazz and classical fields.  Show less

Masumi Ormandy Vocalist Tokyo
“[’ Sunshine’ ] is a revelation, as much for Masumi’ s story as for the sound of her soul.” “...an inspiring record with melancholic echoes of self-determination, focus and courage.” “‘ Sunshine...' is her baptismal moment.” 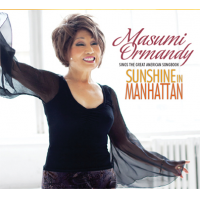 All About Jazz musician pages are maintained by musicians, publicists and trusted members like you. Interested? Tell us why you would like to improve the Masumi Ormandy musician page.