”Marshall Keys' dulcet tones and earthy compositions conjure the spirits of jazzmen past and future. From mainstream to contemporary, from bebop to hip hop, he plays the saxophone with a sense of grace and emotion that is wholly without cliché.” -Mike Sager, Esquire

“Reedman Marshall Keys has his work cut out for him on his new CD Times Aligned, since anyone wishing to hear an alto-soprano saxophonist perform in a contemporary jazz setting has what, a few thousand options? A gifted musician and composer could have easily disappeared in the crowd, but Keys leaves his mark here by displaying his engaging musicality in a series of refreshingly textured contexts” -Mike Joyce, The Washington Post

A native of Washington, DC, Marshall began playing in the DC Youth Orchestra Program, then flirted with Jazz Studies at Howard University, all the while gigging with the notorious Blackbyrds, and the great blues artists Jimmy McGriff and Jimmy Witherspoon. He's played the East Coast Jazz Festival in Washington, DC as well as festivals in Germany, Ireland, Holland, Mexico, Indonesia, Africa and the Virgin Islands. He was a featured performer on the 17th Annual Norway Jazz Cruise. Marshall has enjoyed two collaborations with Mexican jazz pianist Juan Jose Calatayud at the Mexican Cultural Institute in Washington, DC and at the Museum of Latin American Art in Long Beach, California. In 2002 he toured Central and South America as a Jazz Ambassador with Lenny Robinson’s Organic Trio, and in 2003 toured Japan and the UK with vocalist Jimmy Scott. In May of 2005 Marshall went to Guinea, West Africa to perform and to lecture on the history of jazz in the US. Other highlights include a special concert performance of the music of Wayne Shorter at the Museum of American History commissioned by the Smithsonian. Guest performer and lecturer at the Romare Bearden Exhibit at the National Gallery of Art. Marshall’s debut CD “Times Aligned” is a beautiful recording featuring four of his original compositions, a beautiful cover of Janet Jackson, Jimmy Jam & Terry Lewis’ “The Body That Loves You”, as well as performance and compositions by Scott Ambush (Spyro Gyra), Raymond Angry (Jill Scott), Federico Pena (Marcus Miller and Maxwell), and Eva Hambach, who is also responsible for the CD design and web site graphic content. The result is a project that looks as good as it sounds.

Marshall has received a National Endowment for the Arts grant and was commissioned by the Smithsonian to perform the works of Wayne Shorter. He was guest performer and lecturer at the Romare Bearden Exhibit at the National Gallery of Art. He has enjoyed two collaborations with Mexican jazz pianist Juan Jose Calatayud at the Mexican Cultural Institute in Washington, DC and at the Museum of Latin American Art in Long Beach, California. He has toured Central and South America twice for the State Department as a Jazz Ambassador and In May of 2005 traveled to Guinea, West Africa to perform and to lecture on the history of jazz in the US.

In August of 2009 he was guest soloist at the Ford Amphitheater in Hollywood, California playing music from the Harlem Renaissance. He joined Jason Moran’s Bandwagon at the Kennedy Center for two performances in 2012, and backed Stevie Wonder at the Howard Theatre in February 2013. The Marshall Keys Group performs at the DC Jazz Festival every year it is held

He has worked with many of the world’s greatest musicians including: Jimmy McGriff, Jimmy Scott, Lionel Hampton, Stevie Wonder, Clark Terry, Jimmy Heath, Groove Holmes and Jimmy Witherspoon. He has played in jazz festivals in the US, Germany, Ireland, Holland, Mexico, Indonesia, The Virgin Islands and was a featured performer on the 17th Annual Norway Jazz Cruise, and the East Coast Jazz Festival in Washington, DC.

Marshall began his training in the DC Youth Orchestra Program and continued it in the Jazz Studies Program at Howard University. He cut his teeth playing in local bands before gaining his first professional experience with The Blackbyrds and a long association with the great blues organist Jimmy McGriff with whom he recorded the album “Countdown”. Show less 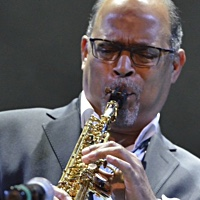 All About Jazz musician pages are maintained by musicians, publicists and trusted members like you. Interested? Tell us why you would like to improve the Marshall Keys musician page.