”Marco was born in Buenos Aires, Argentina. From a young age, he was introduced to music by his mother, a singer and a music therapist. Having been exposed to a variety of instruments and genres since his early childhood, by the age of 14 he chose guitar as his main one and decided to become a professional musician. Since then, he started teaching and performing with different groups in the Buenos Aires scene, influenced by his love of Jazz and of Argentinian folk music tradition.

In August of 2018, he moved to New York to attend the Jazz Program of the City College of New York, and after a year he transferred to The New School of Jazz and Contemporary Music

Music with a scholarship from The New School, and the Latin Grammy Cultural Foundation. In his time in New York, Marco has been performing consistently with different groups as well as solo, and studying with players of the jazz scene such as Peter Bernstein, Reggie Workman, Guillermo Klein, Lage Lund, Steve Cardenas, Tony Malaby, Luis Perdomo, Glenn Zaleski, Andrew Cyrille, between others.

Through the Fall of 2020, he took a series of lessons with Guillermo Klein; and in December of 2020 he recorded some of them in his debut album “Parques” (“Parks” in Spanish), with Arturo Valdez on Upright Bass and Fernando Ferrarone on Trumpet. The album was released in February of 2021.” 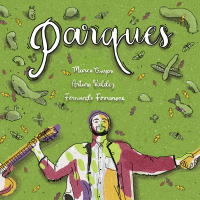 All About Jazz musician pages are maintained by musicians, publicists and trusted members like you. Interested? Tell us why you would like to improve the Marco Grispo musician page.