Welcome to the homepage of Marc Nelson! Marc is a Philly native and founding member of Boys II Men. He has had a stellar career in the R&B world with two successful solo projects (I Want You, 15 Minutes) and a group effort with a 90's band called Az Yet (Last Night). He is moving into the world of jazz with a beautiful cover of the 1968 Grady Tate classic, Sack Full of Dreams. He is accompanied by some of the best musicians on the planet including Ray Angry on Piano, Christian McBride on Bass, & Jerome Jennings on Drums.

Marc has quite an interesting backstory. His high school days were spent learning everything from American History to Music Theory alongside Joey DeFrancesco, and Christian McBride, as well as the current bandleader on The Tonight Show, Questlove. They all graduated from the Performing Arts high school in Philly, same year! 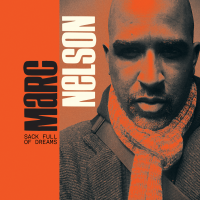 All About Jazz musician pages are maintained by musicians, publicists and trusted members like you. Interested? Tell us why you would like to improve the Marc Nelson musician page.