Marc Brenken (born June 17th, 1973) started to play piano at the age of eight and soon discovered his love for jazz and improvisation. He studied at Folkwang University of the Arts in Essen, Germany and attended masterclasses with Kenny Werner, John Taylor, Fred Hersch, Marc Copland and Richie Beirach.

In 2006 his debut CD "Eight Short Stories" was released. Marc composed the music for this album.

2009 a trio album, "It Could Happen to You", followed, featuring Alex Morsey on double-bass and Marcus Rieck on drums. The album was recorded at the renowned "Fattoria Musica" in Osnabruck, Germany.

In 2012 he released his third album: "Starting Our Journey" with the Marc Brenken - Jean-Yves Braun Quartet, featuring original compositons of guitarist Jean-Yves Braun and of his own.

Concert tours have taken him a. o. to Romania, the Netherlands, Spain, Norway, Lebanon and Mongolia. Furthermore he is also featured on CD releases of the Literaturkommission für Westfalen (jazz & poetry projects - "Live auf dem Kulturgut").

2010 the Marc Brenken Trio was semi-finalist of the "Neuer Deutscher Jazzpreis" (New German Jazz Award), Mannheim. In December 2011 the Marc Brenken - Christian Kappe Quartet was voted the winner of the "First Jazz Prize Ruhr" by the audience at domicil, Dortmund.

Marc Brenken Trio Release "It Could Happen to You"

"as unusual as his body language are the musical short stories that pianist and composer Marc Brenken tells (...) stories that characterise him as a highly enjoyable author" (Münstersche Zeitung)

"true jazz, rooted in the tradition without quoting it unconsidered (...) an exciting musical journey that offers quite a few discoveries" (Jazzpodium)

listening to each other in a band, practicing group improvisation, finding new ways to arrange standards and other compositions 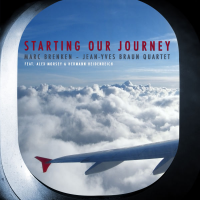 It Could Happen to You

From: It Could Happen to You
By Marc Brenken

All About Jazz musician pages are maintained by musicians, publicists and trusted members like you. Interested? Tell us why you would like to improve the Marc Brenken musician page.