Man On Land first performed in 2009 at the Taylor House in Jamaica Plain, playing original music by all three members. The sympathetic connection between them was obvious, and inspired them to keep performing and composing specifically for the group. Through a decade of performing each other’s music, that connection has deepened and is clearly manifested in this debut recording. Their original music places a great emphasis on melody, narrative, atmosphere, and interaction, blending together their distinct compositional voices. The versatility and imagination of their live performances have created a loyal following in the Boston area.

On this, their debut album, the trio takes the listener through many distinct musical landscapes and shifting moods. The propulsive opening track “Oomph” sets a high bar, and is followed by a bluesy treatment of “Hedwig’s Theme” from the Harry Potter movies. Friedland’s rugged yet suave “Lumbersexual” leads to Loughman’s sultry arrangement of the jazz standard “I Didn’t Know What Time It Was.” McMahon’s martial composition “Peddler’s Theme,” Friedland’s joyful ode to his newborn daughter, “Nora’s Swing” and McMahon’s L’Etranger” - a musical exploration of the book by Albert Camus of the same name - show off other sides of Man On Land, as does their take on the lovely Lennon/McCartney tune “For No One.” The album closes with Friedland’s driving cut “Late Night Snack,” and the cinematic closing number, “Listen.” 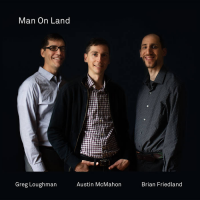 All About Jazz musician pages are maintained by musicians, publicists and trusted members like you. Interested? Tell us why you would like to improve the Man On Land musician page.