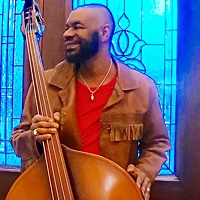 Luico Hopper (pronounced” Lou-e-co) grew up in Virginia to a musical family. His father played the guitar and both parents sang in the church choir. Luico's first instrument was the clarinet that he played throughout high school. He developed interest in the guitar around the age of twelve and taught himself to play after being inspired by his father's musicianship. He started playing the electric and acoustic bass during his freshman year in college. Hopper joined the Norfolk State College Jazz Ensemble remaining part of this group until graduating in 1974 with a B.A. in Sociology.

After college, Hopper moved to New York City to become a professional musician. In the '80s and '90s his career was established as a studio bassist recording on scores of radio and television commercials. During this time, Hopper also recorded and toured with a number of artists including Phyllis Hyman, Gato Barbieri, Roberta Flack, Gil Evans, Diana Ross, Earl Klugh, Jonathan Butler, Stephanie Mills, Johnny Gill, Gloria Lynne, Luther Vandross and Bryan Ferry.

In the mid-eighties, Hopper became increasingly sought after to perform on Broadway beginning with the original hit musical Dreamgirls. He was the featured bassist in the Broadway hit, Five Guys Named Moe and later performed in numerous other Broadway hits including Bring In Da Noise, Bring In the Funk, The Lion King, Shrek the Musical and Priscilla Queen of the Desert. In 2013, Hopper accepted the coveted bass chair for the hit sensation Motown the Musical, a role that was particularly meaningful since his childhood musical inspiration was the legendary Motown bassist, James Jamerson.

In 1995, Hopper released his first solo album, Lessons of Light, featuring his multiple talents as a musician, composer and producer. His second solo album, Reflections, was released in 2001.

In recent years Hopper has played several concerts with the legendary Smokey Robinson and most recently contributed to the 2020 soundtrack for The Glorias, a documentary about the life of Gloria Steinem. To this day, Hopper continues to pursue his craft with enormous passion, dedication and discipline reflective of the artist he was born to be. Show less

All About Jazz musician pages are maintained by musicians, publicists and trusted members like you. Interested? Tell us why you would like to improve the Luico Hopper musician page.