Kendall Moore is an active trombonist, composer, and arranger in the Miami metropolitan area. In 2008, he received his B.M. in Jazz Studies from Roosevelt University’s Chicago College of Performing Arts, where he studied with Tom Garling and Jay Friedman. In 2010, he received his Master’s Degree in Studio Jazz Writing from University of Miami, where he studied under Gary Lindsay, Whit Sidener, and Dante Luciani. He is currently pursuing a Doctorate in Jazz Performance from the University of Miami.

While at Roosevelt University, Kendall was given the opportunity to play with guest artists such as Ralph Bowen, Wycliffe Gordon, Rob McConnell, John Swana, Paul Wertico, and Lew Soloff.

At the University of Miami, Kendall has been a member of the school’s premier large ensemble, the Concert Jazz Band, and has had the opportunity to work with such artists as Gary Burton, Sam Rivers, Chris Potter, Dave Koz, Eric Marienthal, John Clayton, Jeff Hamilton, and many others. Kendall has also been a member of the critically acclaimed Henry Mancini Institute Studio Orchestra (recently featured on HBO with Robert Klein’s Comedy Special), and performed with such artists as Patti Austin, Nestor Torrez, Will Lee, Jon Secada, Ricky Skaggs, and many others.

Kendall has received accolades as a composer and arranger. In 2009, he received the ASCAP Foundation Young Jazz Composer Award, and in 2010, received the ASCAP Foundation Henry Mancini Fellowship. Recently he arranged music for the January 2014 premiere of “Jazz at the Philharmonic”, which aired nationally on PBS and is currently arranging large ensemble works for Khristian Dentley (vocalist in Take 6) and Milton Suggs.

In his professional performance career, he has performed with McCoy Tyner, Ahmad Jamal, Dave Brubeck, Jimmy Heath, Herlin Riley, and many others as a member of large ensembles. In the small group jazz setting, he has had the opportunity to perform with and arrange music for artists such as Winard Harper, Robert Irving III and many others. In addition to performing with ensembles such as the Chicago Jazz Orchestra, Chicago Jazz Ensemble, and South Florida Jazz Orchestra, Kendall has performed on many occasions with his own ensembles in the Chicago and Miami metropolitan areas. 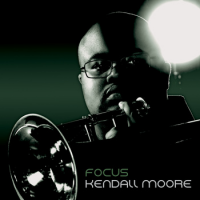 From: Focus
By Kendall Moore

All About Jazz musician pages are maintained by musicians, publicists and trusted members like you. Interested? Tell us why you would like to improve the Kendall Moore musician page.