Katharine Timoney is a jazz vocalist and songwriter from Northern Ireland. She is the recent winner of the BBC NI Platform Award in the Jazz Category sponsored by The Arts Council of Northern Ireland. As part of the award, she performed her songs with The Ulster Orchestra at a BBC concert in The Ulster Hall, Belfast in May 2019 and also at the BBC NI Proms in 2020. Katharine released her debut album ‘Man of Mine’ in 2016 and regularly performs at jazz festivals, most notably Cork Guinness Jazz Festival and Sligo Jazz Project.

Katharine has recently recorded her next record with producer Ben Castle due for release in 2021.

A raunchy, no nonsense voice! The songs are powerful, and yet quirky, recounting tales of tumultuous relationships, betrayal and desire. - Bebop Spoken Here (UK) 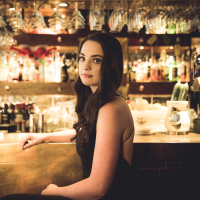 All About Jazz musician pages are maintained by musicians, publicists and trusted members like you. Interested? Tell us why you would like to improve the Katharine Timoney musician page.