Born in 1992, Kasper Agnas has, over the past years, been at the helm of the new Swedish jazz scene. He has collaborated with a number of European musicians (Julia Strzalek, Susana Santos Silva, David Stackenäs, Joakim Milder, Nils Landgren…) and received critical acclaim for his group Agnas Bros., bringing together his three brothers with whom he has toured several European countries.

Kasper was the winner of the Montreux Jazz Electric Guitar Competition in 2017.

Agnas Bros. Kasper Agnas Cirkus Hello Louli Kasper Agnas guitar
"The gap between the young Swede and his competitors was judged to be so considerable that the jury decided not to attribute the second prize." About Kasper winning the the Montreux Jazz Electric Guitar Competition.

"All appearances I have done with the brothers have been an excitement and there is no doubt that it will remain so even in the future. With courage and much humor are they creating a common goal, to find to people's hearts" - Nils Landgren. About Agnas Bros. 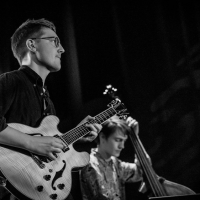 All About Jazz musician pages are maintained by musicians, publicists and trusted members like you. Interested? Tell us why you would like to improve the Kasper Agnas musician page.