Deemed “brilliant” by Howard Reich of the Chicago Tribune, Julien Labro has established himself as one of the foremost accordion and bandoneon players in both the classical and jazz worlds. His artistry, virtuosity, and creativity as a musician, composer and arranger have earned him international acclaim and continue to astonish audiences worldwide.

French-born Labro was inﬂuenced early on by traditional folk music and the melodic, lyrical quality of the French chanson. However, he spent every last cent of his pocket money collecting CDs by jazz legends like Charlie Parker and Miles Davis, thirsty for the originality, creativity, and the endless possibilities in their musical language.

After graduating from the Marseille Conservatory of Music, Labro began winning international awards, taking ﬁrst prize in the Coupe Mondiale in 1996 and the Castelﬁdardo Competitions in 1997. After sweeping ﬁrst place in the Marcel Azzola, Jo Privat and Medard Ferrero competitions in 1995 and 1998, Labro moved to the United States to further pursue his studies and musical dream. There he embraced other genres of music, ranging from pop and hip hop to electronic/techno and rap, as well as Latin, Indian, Middle Eastern, and other types of world music.

Equipped with advanced degrees in classical music, jazz studies, and composition, Labro draws from both his diverse academic background and eclectic musical taste in his professional life as a performer, arranger, and composer.

As a musician, Labro is constantly evolving artistically. He searches for new themes and untried concepts, transforming and developing his creative ideas into new projects. Piazzolla, a major inﬂuence and the reason Labro picked up the bandoneon, is also the title of his recent release on Azica Records with classical guitarist Jason Vieaux and A Far Cry chamber orchestra. It features Labro’s arrangements of the tango master’s Four Seasons. Other upcoming releases include Grammy-award winning vocalist Cassandra Wilson’s Another Country (eOne Music) and critically acclaimed Hot Club of Detroit’s Junction on Mack Avenue Records.

On a creative level, Labro has been enlisted as an arranger for several professional ensembles, most recently for Ensemble Vivant of Toronto, the conductorless Boston-based chamber orchestra A Far Cry, and Curtis On Tour from the Curtis Institute of Music faculty of Philadelphia. 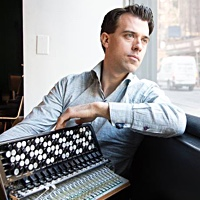 All About Jazz musician pages are maintained by musicians, publicists and trusted members like you. Interested? Tell us why you would like to improve the Julien Labro musician page.