New York based guitarist and composer.

Born in Namsos, Norway on October 19th 1976, he took up the guitar at the age of 9. After enrolling in the performing arts program at Nauma Highschool, he started studying jazz and classical guitar. In 1997 he moved to Kristiansand to attend Agder College of Music.

After two years he decided to move to the US to continue his studies at University of North Texas, under the guidance of Fred Hamilton and Lynn Seaton. In 2001 he moved to New York City to attend Manhattan School of Music, where he studied with Chris Rosenberg, Dave Liebman, Garry Dial and Phil Markowtiz. He finished his Master’s Degree in 2003 and has since the lived in New York, working as a professional musician, covering many styles of music He is the leader of the Jostein Gulbrandsen Quartet and is also a member of the Nate Smith Quartet, Randal and the Matt Grason project, and the Gulbrandsen/Yonezawa Duo, performing at venues like Smoke, Detour, B.B Kings Blues Bar, Kavehaz, Scandinavia House, Blues Alley and Hard Rock Cafe.He has performed for the norwegian Royal family and appeared both on national and public television both in Norway and America.

He has performed in many different contires including Scotland, England, and Japan.

I am covering all styles of music,and teach all levels. Learn how to play chords,scales,reading music,playing by ear,playing solos in pop,rock,jazz,blues,country and classical. Both electric and acoustic guitar. I have had hundreds of students form age 5 to adult. Faculty member of Woodside Music Studio(Park ridge NJ) and Stella Musicschool(Ramsey NJ) Over ten years of teaching experience including Agder College of Music,Norway. Please contact me for rates and availability. 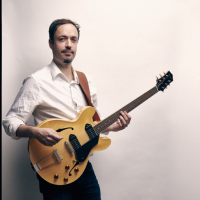 All About Jazz musician pages are maintained by musicians, publicists and trusted members like you. Interested? Tell us why you would like to improve the Jostein Gulbrandsen musician page.