Jon Deshler started out in Los Angeles in the 1960's-70's as a teenage trumpet student and jazz photographer. He was surrounded by some of the best and routinely heard and photographed them at clubs, festivals, and more all over Los Angeles. His most important trumpet teachers were Carlton McBeth and Nelson Hatt, he received mentorship from Bobby Shew, Lew Tabackin, Bruce Paulson, and others. His earliest jazz influences were Bobby Shew, Freddie Hubbard, Don Radar, Bill Berry, Conte Candoli, Don Menza, Pete Christlieb, Warren Luening, and many more.

Having graduated from the prestigious Pasadena, Arts Center College of Design with a BFA in Photography in 1986, Jon relocated to Oregon in 1988 and rapidly grew a robust commercial shooting career. Clients have included: The Oregon Symphony, AETNA, Intel, HP, Kaiser, Nokia, Panasonic, Capitol Records, Sony, Freightliner, Sequent, and many more. Mr. Deshler continued shooting jazz performance photos throughout his career at varying levels.

In 2006 Jon reengaged with his horn. He became a member of the LACC Studio Jazz Ensemble in Hollywood, CA, and he began a concerted effort to play more. After some time and participation in numerous bands from a James Brown Revival Band, to Thelonious Dub, and performances all over Los Angeles, from BB Kings Universal, Unity Fellowship Church LA, to the Baked Potato in Studio City, Jon again relocated back to his beloved Oregon in 2012 where he started his own trio. After much due diligence and focus Jon's trio cultivated gigs and performance opportunities all over the Willamette Valley, including clubs, wine bars, events, festivals, and more. When covid hit in March of 2020, Jon took it all outdoors to keep it going, and that led to his TUNE TOURS project. most recently his quartet was contracted by the Bureau of Land Management to perform at the Historic Oregon Trail Interpretive Center and Baker City's Geiser/Pollman Park, in September of 2021.

Having such diverse professional experience in the ARTS has provided Jon a unique perspective and voice. As a performer, photographer and teacher Jon continues to cultivate and nurture his gospel of authenticity, personal expression, accountability, and conservation in everything he does while promoting better care of all baby brains everywhere.

Dr. Tim Lautzenheiser VP Education Conn & Selmer Co. "Thanks so much for your email and the inside look at what you are doing. It is remarkable…AN UNDERSTATEMENT! I did check out the videos; you are hangin’ out with some really extraordinary musicians. Looks like everyone is having a good time…and for all the right reasons; smile." 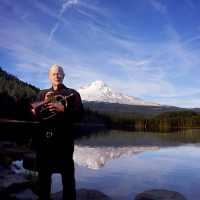 All About Jazz musician pages are maintained by musicians, publicists and trusted members like you. Interested? Tell us why you would like to improve the Jon Deshler musician page.