From San Francisco and Paris, Jazz vocalist Joan Minor interprets Jazz standards with soul-stirring veracity. As a solo performer, she has performed worldwide in the U.S.A, Europe and Africa, particularly San Francisco, New York, Berlin, Zermatt, Athens and Paris, where she is now based. Her first CD ‘Integrity Matters’, which was recorded in Paris, warranted praise by the iconic Blues legend, Mr. B.B. King. Joan is formally trained in voice, violin and piano and has deeply studied the Jazz masters. She broadened her Jazz expression under the tutelage of Patti Cathcart, New York Broadway artist June Smith, Phil Matson and the legendary Barry Harris. She has performed, among many others, with Odia Coats, Jamie Davis, Percy Scott, Jeff Ballard, Danny Hull, Kitty Margolis, Wayne Dockery, Olivier Hutman, Madeline Eastman, Smith Dobson and the «David Hardiman All Stars Big Band».

In addition to solo performances, Joan designs and conducts master classes and workshops in Jazz expression, vocal coaching, and Gospel choir excellence. The Wichita, Kansas native is a born performer. Her grandmother was a traveling jazz vocalist and vaudevillian, her mother sings and her elder brother is a guitarist who “has played with some of everybody,” including Nancy Wilson. Her repertoire is extensive, anchored in the Jazz classics, and extends to soul, blues and gospel.

She is a cultural ambassadress for Jazz, conducting multiple tours on behalf of the State Department of the United States of America in Zambia, Tanzania, Niger, Madagascar, Eswatini (Swaziland ), Eritrea and Gabon, where she performed privately for the current President. Her televised work includes the BBC documentary “Destination Music: Zanzibar” and “A Jazz Tribute to George Gershwin” introduced by Michael Feinstein.

Joan is totally ‘at home’ on stage. Her trademark, “megawatt” smile, personal warmth and technical mastery are mesmerizing. She is energy personified and her shows are “live and riveting” from the first note, since she is one of that select group of singers whose lyrical interpretation oozes sensitivity and feeling. Shuttling between America and France, Joan thrills audiences with her talent and upbeat shows. Many things change constantly in our world, fortunately, class, warmth and excellent music never go out of style and that’s what you can expect from this artist. 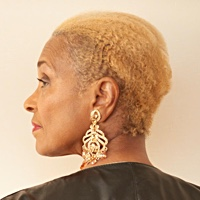 All About Jazz musician pages are maintained by musicians, publicists and trusted members like you. Interested? Tell us why you would like to improve the Joan Minor musician page.