Acclaimed vocalist, trumpeter and composer Jennifer Hartswick issues Something in the Water, her fourth record as a leader and first for Christian McBride’s Mack Avenue Music Group imprint Brother Mister Productions. Reprising her studio collaboration with renowned bassist and dear friend McBride, the highly sought-after singer and trumpeter interprets nine new tracks comprised of original repertoire and fresh arrangements of familiar songs alongside her core ensemble and featured guests. Co-written with guitarist and album producer Nick Cassarino, Something in the Water presents a tender portrait of the human condition, brimming with humor and vulnerability. “We wanted to celebrate the human experience,” says the Nashville-based artist. “We wanted to write about all facets of love and life and loss and gain. There’s definitely an arc of someone’s life in this album.”

Hartswick is a true working artist. For the past two decades, the small-town girl turned powerhouse professional has appeared at clubs and arenas throughout the world, in diverse ensembles and as a founding member of the Trey Anastasio Band (TAB); her buoyant expression and harmonic reflexes have become integral to the project’s signature sound. To her original music, Hartswick brings effervescing spontaneity and degrees of self-disclosure. Her songs intensify. She layers sound on sound, stacking horns, threading vocals and seeking opportunities for instrumental role-shifting and conversational trades. In addition to those from McBride and Cassarino, Something in the Water features contributions from longtime collaborators drummer Conor Elmes, vocalist Celisse Henderson and keyboardist Rob Marscher, as well as trombonists Natalie Cressman and Roy Agee, among other special guests.

Recorded at Sound Emporium alongside engineer Joe Costa, and mixed and mastered by Greg Magers and Dan Shike, respectively, Something in the Water came to life in Nashville following an impromptu writing retreat in New England. Hartswick and Cassarino spent a week and a half at a closed bed and breakfast in Vermont during the winter of 2021; there, they focused on composing the entire record in a controlled environment, with lyric input from songwriter Erin Boyd. “We’d write and cook and write and cook and laugh and cry and write and cook,” says Hartswick. “That was the purpose of the trip, to see if we could write an album.”

Part memoir, part fiction, Something in the Water intercuts vignettes of the human condition with elements of Hartswick’s lived experiences: “Who’s to say which ones are real? I hope the storytelling is good enough that people don’t know.” The album opens on “Only Time Will Tell” with virtuosic tone-casting from McBride out front. A thick, buoyant groove becomes a vessel for Hartswick’s gilded wall of trumpets and lyrical interplay between her voice and her horn. Penned by Boyd and Cassarino, “Fairytale” explores the course of love. Hartswick’s mastery of phrasing and artful dynamics share the story of loss and understanding. Her trumpet responds to her vocal, briefly and only once; in that moment, she captures memory, illusion and acceptance. “Two Way Mirror” pops with syncopation and nuance. She greases her trumpet solo with short melodic phrases and rhythmic intention.

Trades between Hartswick and Agee bend around an elastic New Orleans pulse on “By the River.” With vocal contributions from Shira Elias and Maureen Murphy, the song celebrates reveries of girlhood. Randy Newman’s “Guilty” provides an unadorned rumination between Hartswick and McBride. They ebb and flow together, their hookup persisting from opening measure to final phrase. “We met on the bandstand,” says Hartswick, referencing her relationship with the eight-time GRAMMY® Award-winning artist. “And I felt like he’s someone I have spent time with in another life. To have Christian on my previous record was a huge deal for me. He’s been such an incredible supporter of mine since day one.”

A nod to her beloved jam band scene, “For You” proffers a relaxed groove across a harmonic multiverse. “Innocence” features Cressman’s arrangement of symphonic, layered trombones. “We were going to have strings on that track, and then I heard something Natalie had recorded as a beautiful trombone choir,” says Hartswick. “She never asked for a chart. Her ear is out of control. She’s really special.” Flexing Cassarino’s loving treatment of vintage — and ’90s — R&B elements, “Enamored” serves as the album’s love anthem. His brief but enduring solo gesture offers listeners a sonic glimpse at his warmth and lyricism. Together, he and Hartswick summon a full, near choral sound on album closer, Dave Matthews’ “Weary.” Admittedly, they recorded the song uncertain of whether it would appear on the record. “We ended up feeling like it was a really appropriate button,” says Hartswick. “What better message of support, especially for what we’re all going through?”

Over the years, Hartswick’s sound has evolved and refined. She views her horn and her voice as different facets of a single expression that shapeshifts as she enters new phases of life and work. Something in the Water presents a snapshot of one moment’s present tense. She appreciates her listeners’ willingness to explore each discovery alongside her: “My music is blossoming. More life has been lived and evolution is happening. I hope people who listen do so with an open heart.”

"Jennifer is a triple threat as a songwriter, singer and trumpeter. As a member of Trey Anastasio's band for the past two decades, she has a legion of loyal fans. I’m one of those loyal fans. It’s an honor to have her as a part of the Brother Mister family." – Christian McBride

"A gem from start to finish that should wow both jazz and soul music audiences. It feels like Chaka went into the studio with Patrice Rushen and decided to let loose. We simply love it..." – SoulTracks

"Jennifer is a triple threat as a songwriter, singer and trumpeter. As a member of Trey Anastasio's band for the past two decades, she has a legion of loyal fans. I’m one of those loyal fans. It’s an honor to have her as a part of the Brother Mister family." – Christian McBride

"A gem from start to finish that should wow both jazz and soul music audiences. It feels like Chaka went into the studio with Patrice Rushen and decided to let loose. We simply love it..." – SoulTracks

"Jennifer Hartswick has talent for days and displays different facets of her skills throughout Something in the Water via different genres, attitudes, and emotions that shall indeed launch a stellar solo career." – Glide Magazine

"On [the lead single, 'Only Time Will Tell'], Hartswick showcases just how much her sound has evolved and how defined it has become. She layers sound upon sound, stacking horns, and threading vocals, all while keeping the core of the track buoyant, ready for swift shifts and clean enough to express a narrative cleanly." – Relix

"McBride’s singular bass tone sets the stage for the layered track before Hartswick takes listeners on a haunting tour of a love gone sideways with swelling jazz accompaniment and her famously acrobatic vocal leads." – Live for Live Music

"Jennifer is the rarest of musicians and one of the most beautiful and soulful people that I’ve ever met. She pours all of her heart, her love and her pain into every single note, and for more than 20 years I’ve stood onstage next to her, listening in pure awe. I’m so thrilled that everyone can hear and experience that same fountain of musical emotion on this beautiful new album. We are blessed to be alive in the era of the one and only Jennifer Hartswick." – Trey Anastasio 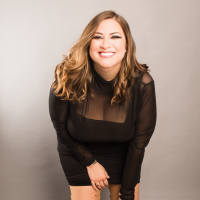 All About Jazz musician pages are maintained by musicians, publicists and trusted members like you. Interested? Tell us why you would like to improve the Jennifer Hartswick musician page.