Ian Sadock is an award-winning pianist and jazz composer from Philadelphia with unique research interests in the mechanics of improvised music, maintaining an active and expanding studio of piano and music theory students.

Ian Sadock is on the piano faculty at The Settlement School and Greensleeves Music, providing private piano and music theory lessons in the greater Philadelphia region. His education included private study under John Swana, Dr. Theresa Klinefelter and Peter Paulsen at West Chester University, Don Glanden at The University of the Arts, Dr. Igor Resniaski and David Dzubinski at the Nelly Berman School of Music, and Arturo O’Farrill, amongst others. He holds a Master of Music degree in Jazz Studies from The University of the Arts, as well as a bachelor’s of music in piano performance with a concentration in jazz from West Chester University. Honors and awards include two Boysie Lowery Living Jazz Residencies, the Michael Falcone Jazz Scholarship and the Alta M. Ketner Outstanding Incoming Freshman Scholarship, Graduate Assistantship under The University of the Arts, and First Place in Nelly Berman 25th Anniversary Golden Key Competition.

With headline performances at world-class venues, such as the Kimmel Center, TIME, Chris’s Jazz Cafe, Sadock’s musical perspective is refreshing and innovative. Current projects include performances and original compositions involving the Ian Sadock Quartet, Latin jazz band Habanero, which he co-founded. Previous performance credits include West Chester University’s premier jazz ensemble the Criterions, where he shared the stage with famed guest artists at the International Trumpet Guild conference and Cavalcade of Bands competitions. He was also featured in several University of the Arts ensembles and headlined charitable performances with the WCU Honors Jazz Ensemble.

Ian Sadock is a member of the American Society of Composers, Authors, and Publishers (ASCAP). 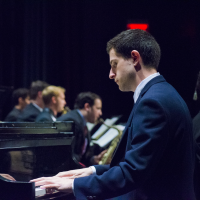 All About Jazz musician pages are maintained by musicians, publicists and trusted members like you. Interested? Tell us why you would like to improve the Ian Sadock musician page.