There are jazz legends and then there are the “underground of the jazz renowned” – those who, although not as well known to the general public, are hailed by critics, revered by their legendary peers, influential upon younger players and sought after by collectors and cognoscenti. Hod O'Brien is one of these.

Hod O’Brien is one of these quiet-and-true jazz giants. He burst upon the scene in the late 50s when he came to New York City from his hometown in the Berkshire Mountains of Northwest Connecticut near Lenox, Mass. and Tanglewood. He soon became part of the “loft scene” jamming with other bop-influenced players like Pepper Adams, Kenny Burrell, Oscar Pettiford and Stan Getz, to name a few. At the age of 21, he was hired to record with Art Farmer, Donald Byrd and Idrees Sulieman on a record which has become a classic, “Three Trumpets” (now retitled “Trumpets All Out” on the Prestige label). He became an active part of the NY scene playing at such historical clubs as Birdland, the Continental, the Cork and Bib, the Black Pearl and Small’s Paradise.

While still 21, O’Brien was asked by Red Rodney to take Bill Evans’ place in the Oscar Pettiford Quintet. The group alternated sets with Thelonious Monk at the famous Five Spot, among other appearances. After this stint with Pettiford, O’Brien joined up with tenor saxophonist J.R. Monterose in a band which included Elvin Jones and Wilbur Ware. O’Brien took a hiatus from the jazz scene from 1963-73 when he returned to Columbia University to study mathematics. While there, he studied composition with Charles Wourinen and was part of Columbia’s contemporary music scene. He later worked in statistical research in the field of psychology but made his way back to jazz in the mid-70s with the opening of his own club, The St. James Infirmary, where he led a house band with Cameron Brown and Beaver Harris and backed up such guest artists as Chet Baker, Roswell Rudd, Lee Konitz, Zoot Sims, Charlie Rouse and others. He followed this with an 5-year, 5-night/week engagement at Gregory’s (one of the few upper East side jazz clubs in NY at the time and famous worldwide) with guitarist Joe Puma, bassist Frank Luther, and various other players including Sonny Greer, Russer Procope, and Marc Johnson. During this time, O’Brien also appeared at such NY clubs as Fat Tuesday’s Lush Life (with Chet Baker) and the Blue Note.

Many years have passed since the early bebop days and most players on the scene today have been influenced by contemporary jazz, rock, latin and other genres of music. O’Brien’s style is still one of the purest representations of bop and swing piano around (in addition to Barry Harris, with whom Hod recorded the CD “Hod Meets Barry”). One can also hear in his playing a healthy infusion of Dave McKenna’s influence. In 1980, O’Brien teamed up with singer Stephanie Nakasian (who spent two years with Jon Hendricks and Company). Since then, they have toured together all over the world at major jazz venues, won various awards and have recorded many CD’s. In 1994, at the tender age of 58, Hod O’Brien became a father — he and his wife Stephanie Nakasian and their daughter Veronica make their home near Charlottesville,Virginia.   Together Hod, Stephanie and Veronica often tour as “The Family O'Brien”. Veronica, now 20, is completing a jazz voice major at the University of Miami.

O’Brien is being “discovered in his prime”, performing around the U.S., Europe, Japan, Russia, England and the Caribbean. His numerous festival appearances include the Toronto and Ottawa Jazz Festivals, the N.C. Jazz Festival, Port Townsend Jazz Festival, East Coast Jazz Festival, Telluride Jazz Celebration, Delaware Water Gap Jazz Festival and the Pittsfield Jazz Festival. As well, he was a featured performer on the Jazz Party at Sea and James Moody’s 80th Birthday Cruises was also featured on the cover of Jazz Journal magazine (England) and in a feature article in Jazz Times. O'Brien is being recorded quite a lot as a leader these days with 15 cds out since 2004 including releases in Japan and Holland, a solo piano tribute to Chet Baker and three very successful CDs from a Live Recording at Blues Alley in Washington, DC with Kenny Washington and Ray Drummond. He was selected as one of 10 pianists to perform in Japan on the Fujitsu 100 Gold Fingers Tour in May and June of 2007, along with Kenny Barron, Cedar Walton, Junior Mance, Toshiko Akiyoshi, Cyrus Chestnut, Benny Green, Don Friedman, Joao Donato and Gerald Clayton. As well, he has two recordings on the Fresh Sound label featuring West Coast greats Tom Warrington and Paul Kreibich.   Other recordings include as a sidemen with jazz greats Chuck Israels (bass), Joe Cohn (guitar), Royce Campbell (guiatr) and John Jensen(trombone). Now, close to his 80th year - after almost 60 years playing jazz piano, Hod O'Brien's playing is as fresh and exciting as ever. His style has inspired new generations of pianists and other musicians and composers and he continues to delight audiences and swing his music around the globe. As Nat Hentoff wrote in Modern Recording magazine, “O’Brien is a long-distance swinger (alluding to O’Brien’s five NY and Boston marathons with times under three hours)… Some of the customers know that he was a vital part of the bop scene… but to most listeners, he’s just a guy who makes you feel good on up tempo numbers and who can get inside your memories on ballads.”   Show less

Stephanie Nakasian with the Hod O'Brien Trio at Dizzy's

”The best bebop pianist this side of Barry Harris.”  —Len Dobbin, The Montreal Mirror

”The best bebop pianist this side of Barry Harris.”  —Len Dobbin, The Montreal Mirror 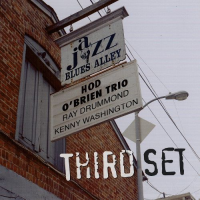 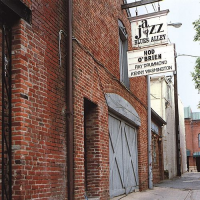 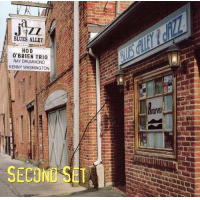 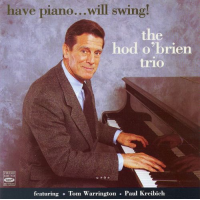 Have Piano Will Swing 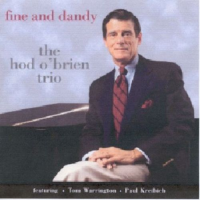 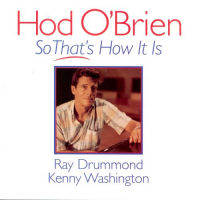 So That's How It Is

All About Jazz musician pages are maintained by musicians, publicists and trusted members like you. Interested? Tell us why you would like to improve the Hod O'Brien musician page.