With rave reviews in New York City, and hailed as "one of the most celebrated teams" in the Lowcountry (Lowcountry Today), sisters Gracie & Lacy bridge the generations, proving that CLASSIC never goes out of style. The award-winning vocal and dance duo have appeared on stage and screen, including NYC's legendary 54/Below, NASA's Apollo Saturn V, Charleston Gaillard Center, Forte Jazz Lounge, Powell Symphony Hall, the St. Louis MUNY, Mar A Lago, HBO, NBC, FOX and ABC.

Performing together for over two decades, the dynamic duo got their start in show business when their childhood "Broadway On The Driveway" shows began drawing large crowds, causing traffic jams and a visit from the local police...read more

“We have been to a number of the Gracie and Lacy shows and are never let down. These sisters are top notch entertainers!” ★★★★★ Google Review, Sandra Selvitelli

"Their talent and unrelenting devotion to the Great American Songbook can't be underestimated..." ★★★★★ Cabaret Scenes Magazine 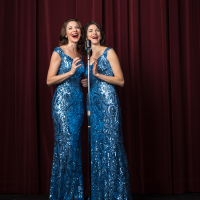 All About Jazz musician pages are maintained by musicians, publicists and trusted members like you. Interested? Tell us why you would like to improve the Gracie and Lacy musician page.