Born and raised in Malone, NY, Freddy Maxwell is no small town boy. His career as a professional trumpet player, arranger, composer and a music educator has touched the lives of literally millions of people worldwide. During his career that spans over two decades, Freddy toured with megastars Alicia Keys, Lionel Hampton, and the Glen Miller Orchestra among numerous other bands, performing in major cities throughout Europe, Japan, Australia, the UK and the US. His impressive versatility has brought him to fans of nearly all music genres, including pop, rock, R&B, jazz, funk, big band, world, Latin, and classical. He has shared stages with iconic jazz and big band stars such as Frank Sinatra, Jerry Lewis, Dizzy Gillespie, and Wynton Marsalis; rock stars Bon Jovi, The Eagles, and ZZ Top; pop stars Diana Ross, Barry White, and Tina Turner; and Latin artists Mark Anthony, Tito Puentes, and Sergio Mendes. Freddy has also performed on recordings with Christina Aguilera (RCA Records), Jamie Block (Capitol Records) and Alicia Keys (Columbia Records). His live national television performances include the Grammys, The David Letterman Show, BET, and NASCAR. Freddy is currently working on his first solo studio album, which he plans to release in Summer 2011.

In addition to his performance and recording career, Freddy has been a New York public school teacher for the past 15 years and is currently the band director at Felix Festa Middle School in New City, New York

. Freddy has lived in London and Monte Carlo and currently resides in New City. Show less 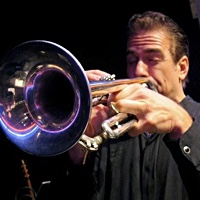 All About Jazz musician pages are maintained by musicians, publicists and trusted members like you. Interested? Tell us why you would like to improve the Freddie Maxwell musician page.