The group has played with the likes of distinct artists such as Enrico Rava, Dave Holland and John Scoffield, and in 2007 Fundación Konex has placed the group among the top 100 breakthrough popular Argentinian artists in the last decade.

2011 saw the release of the acclaimed “Piazzolla Plays Piazzolla”, ESCALANDRUM's tribute to the late great Astor Piazzolla, this unique recording mixes tango and jazz in a fluid and organic fashion. The album's premiere at Buenos Aires' Gran Rex Theatre reached a crowd of over 3000 people, featuring guests artists like Paquito D' Rivera.

The next year the group was nominated to the Latin Grammy Awards for “Best Instrumental Album”, alongside Chick Corea and AI Di Meola. Later that year the group embarked on a worldwide tour that featured two legs in Europe (with distinct presentations in Paris' La Villete, Rome's Auditorium, Denmark, Barcelona' s Festival VIC, Poland, Austria, etc.), performances in Israel and a series of concerts in New York, playing at the infamous “Birdland” joined by singer Ute Lemper and Paquito D' Rivera. The year's world tours ended in October at the famous Festival Cervantino and further 14 concerts throughout Mexico. After 16 years of hard work the project “Piazzolla Plays Piazzolla” won 3 awards at Premias Gardel (Argentina's most important music awards), for “BestJazz AI bum”, “Best Album of the year” and the acclaimed “Golden Gardel”. The latter was previously been awarded to Argentina's most talented popular artists, like Mercedes Sosa, Luis Alberto Spinetta, Charly García and Fito Páez.

ln July 2014 ESCALANDRUM was given the recognition as Argentina's Public Feature, and its founder Daniel “Pipi” Piazzolla received the title of Renowned Personality in National Culture from the municipality of Buenos Aires. At the end of the year, their album “Vertigo” won the Gardel Award for “BestJazz Album”. Released that sarne year, the aibum is distinct for featuring original songs without giving awayjazz influences. The band's success continued in 2015, as their album “Las Cuatro Estaciones Porteflas (Proyecto Eléctrico)” (2014), won “Best Instrumental Tango Orchestra Album” and “Best Production of the year” categories at the Gardel Awards, and Best Jazz Group category at the Konex Foundation Awards. Such recognition has further consolidated the group' s status in Argenti­na's musical scene.

2017 saw two simultaneous album releases: in SESIONES ION - Obras de Mozart e Ginastera the group plays jazz versions of songs written by these authors, whereas in 3001 PROVECTO PIAZZOLLA, in partnership with ELENA ROGER, the music of Astor Piazzolla has been brought fu rther u p to the highest level. After an extraordinay year of world torus they are now recording their 11th album entitled “Studio 2” in the well- known Abbey Road Studios in London, where some of music's finest artists have recorded. The album was nominated to Gardel Awards 2019 for “Album of the year” and has been successful in 3 other categories like “Recording of the year”, “Best Sound Engineering” and “Jazz Album of the year”. The group will release the album “100” - Warner Music 2021, recorded at London’s legendary Abbey Road Studios, a tribute album to the centenary of Astor Piazzolla witch the best tangos by the bandoneón master in wonderful jazz versions.

1- Konex Award 2007. 2- Grammy nomination 2011, in the same category of Chick Corea and Al Di Meola. 3- 8 Gardel Awards: - Gardel de Oro 2012 for "Piazzolla plays Piazzolla"; is the first and unique time this prize was awarded to instrumental music. The group was nominated together with important pop artists. - Gardel 2015 "Production of the Year" for "Las cuatro estaciones porteñas" (Electric project). The shortlist was completed with pop artists. - The 11th album entitled "Studio 2" in 2019 was nominated for "Album of the year" and has been successful in 3 other categories like "Recording of the year", "Best Sound Engineering" and "Jazz Album of the year". 4- 2014, Buenos Aires Legislature appoints Escalandrum as “Culture leading figure”. 5- Konex Platinum 2015 “Artist of the decade”.

The band takes part on educational presentations, which consist in workshops of Argentinian rhythms where all band members show how their instruments work. 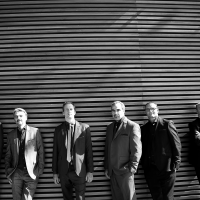 All About Jazz musician pages are maintained by musicians, publicists and trusted members like you. Interested? Tell us why you would like to improve the ESCALANDRUM musician page.