With a variety of work already released, Diego is doing shows on the most important stages around the world enchanting and charming the public wherever he goes with his unique touch.

Diego Figueiredo was born in Franca, Brazil, in 1980, and at the age of 4, he used to strike poses carrying his small guitar. At six, he got a mandolin, which was kept in a very special place in his house. Diego played many instruments before choosing the electric guitar when he was twelve, playing in theaters and local pubs, revealing the great art of improvising and harmonizing. At 15, he conquered theaters and nightclubs in many different Brazilian states, playing solo or with renowned musicians.

For some years he joined different bands, like Banda Gênese and Squema Seis from Brasília, where he lived for a while.

He has studied classical guitar, Brazilian Popular Music and jazz in conservatories in Franca, Ribeirão Preto and Tatuí.

In 1999, he won first place in a contest in South America, when he was awarded a scholarship to study at Berklee College of Music, and when he got all judges amazed with his particular style.

He was finalist for the ICATU HARTFORD Prize in Rio de Janeiro and was praised by the judges.

Besides being a guitar player, Diego is a producer, arranger, orchestrator, multi-instrumentalist and has recently produced and arranged the double album “As várias caras de Drummond” for which Belchior wrote the music for Drummond´s poems, and which was released in CARAS magazine.

In performances around Europe, mainly in Germany, Diego impressed with his technique and sensitivity performing at the University of Berlin, at Quasimodo (where he shared the stage with John Scofield and Yellowjackets) and at the Brazilian Embassy. For ten years, Diego has performed at La Paz Festijazz, held in Bolivia. Diego was invited by the Symphonic Orchestra of La Paz to take part in the recordings of a CD and a DVD and to perform in some concerts to honor Tom Jobim, entitled Jobim de los Andes. Show less

The joy of jazz guitar

“I have never seen such a creative guitarist with such a clean technique” —Roberto Menescal “Diego Figueiredo is the new Baden Powell” —Jazzlive, Denmark 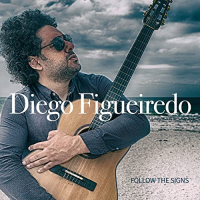 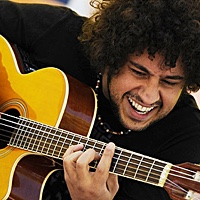 All About Jazz musician pages are maintained by musicians, publicists and trusted members like you. Interested? Tell us why you would like to improve the Diego Figueiredo musician page.