Diego Ramón Jiménez Salazar was born in Madrid in December of 1968. The flamenco singer, Diego, el Cigala, is one of the most praised heirs of Camarón de la Isla in the cante flamenco, and it was Camarón himself who gave him the moniker Dieguito el Cigala.

Coming from a family of artists, he is the nephew of Rafael Farina. He grew up in the Rastro neighborhood of Madrid, where he began to make his own experiences as cantaor. At the young age of 12, he won first prize in the Young Flamenco Artist Contest of Getafe and an award on the TVE talent show, “Gente jóven.” He soon began to play at dances, being solicited by dancers like Cristóbal Reyes, Mario Maya, Manolete, Farruco, Manuel Camacho, and El Güito, among others.

In 1994, he started his solo career with the album, “Undebel,” produced by David Amaya. The album features guitarists like Antón Jiménez, David Amaya, Paquete and Tomatito. In 2000, he released “Entre Vareta and Canasta,” an album released with the promotional support from artists like Gran Wyoming, Santiago Segura, Pablo Carbonell and Javier Krahe, among others. The album features guitar playing by Niño Josele and Vicente Amigo. A year later, he put out “Corren Tiempos de Alegr�-a,” produced by Javier Limón and done with Niño Josele by his side. It features exceptional guest artists like Bebo Valdés and Jerry González. The album was nominated for the Best Flamenco Album award at the Latin Grammy awards. His fourth album was recorded during a concert at Madrid’s Teatro Real, where he was accompanied only by Niño Josele. It was also produced by Javier Limón.

In 2002, Fernando Trueba produced “Lágrimas Negras,” the album that united Cigala with Bebo Valdés on piano. It was released in 2003, and met huge international success. In 2004, he won a Grammy, three Premios de la Música, a Ondas Awards, five Amigo Awards, three platinum albums in Spain and one in Argentina, Mexico and Venezuela. At the end of 2004, the album had sold more than 700,000 copies around the world, by 2008 more than a million.

Paco de Luc�-a added his voice to the album “Cositas buenas” in 2004, which the guitarist turned into the album “Picasso En Mis Ojos,” which was released in 2005. It is Diego el Cigala’s fifth album. It is dedicated to Picasso, the genius of contemporary painting that created cubism. He was awarded a Latin Grammy for Best Flamenco Record in 2006 for “Picasso En Mis Ojos.” Show less 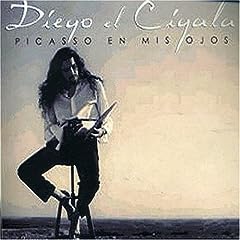 All About Jazz musician pages are maintained by musicians, publicists and trusted members like you. Interested? Tell us why you would like to improve the Diego El Cigala musician page.